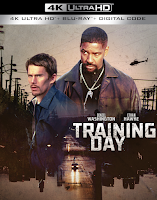 😺TRAINING DAY Arrives on 4K Ultra HD February 28 from Warner Bros
Denzel Washington delivers an Academy Award-winning performance opposite Ethan Hawke in this gritty drama set in the morally ambiguous world of undercover police work. Every day a war rages between drug dealers and cops on the streets of America's inner cities. With every war come casualties, none greater than 13-year veteran Los Angeles narcotics officer Alonzo Harris (Washington), whose questionable methods blur the line between legal and corrupt. Today Alonzo gets a new partner, idealistic rookie Jake Hoyt (Hawke), and Jake has one day--and one day only--to prove his mettle to his fiercely charismatic superior. Over 24 hours, Jake will be dragged into the ethical mire of Alonzo's logic as both men risk their careers and their lives to serve conflicting notions of justice. 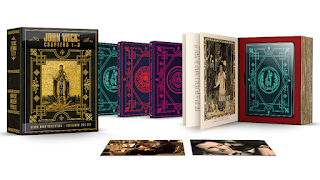 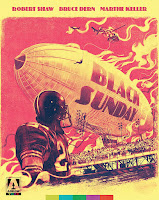 😻BLACK SUNDAY (1977) Finally Coming to Blu-ray on March 28 from Arrow.
Throughout the 1970s, a wave of daring disaster movies gripped cinemagoers with their combination of bravura spectacle and "ripped from the headlines" plotlines. Among these, John Frankenheimer's (The Manchurian Candidate, Ronin) Black Sunday endures to this day as among the cream of the crop. Robert Shaw (Jaws, The Taking of Pelham One Two Three) stars as Major Kabakov, an Israeli agent attempting to avert a terrorist atrocity on US soil. The weapon: a blimp laced with explosives and piloted by Michael Lander (Bruce Dern, Silent Running), a troubled Vietnam vet driven to strike back against the nation he believes has betrayed him. The target: the Orange Bowl stadium, Miami. What follows is a nail-biting race against time culminating in a spectacular aerial climax that will determine the fate of 80,000 spectators. Adapted from the best-selling debut novel by Thomas Harris (The Silence of the Lambs) and featuring virtuoso performances by a cast headlined by Dern, Shaw and Marthe Keller (Marathon Man), Black Sunday is a nerve-shredding, best-in-class suspense thriller from a filmmaker at the top of his game. Also included are a bunch of new and vintage bonus features.

🙀MARATHON MAN Coming to 4K & Blu-ray on February 28 from Kino Lorber.
Is it safe? From the best-selling novel by William Goldman (Butch Cassidy and the Sundance Kid, All the President’s Men, Misery) comes one of the most daring and affecting thrillers ever brought to the screen. Dustin Hoffman (Papillon) plays the likable graduate student and marathon runner of the title, unwillingly trapped in a killing game of intrigue involving a Nazi fugitive, Christian Szell. Laurence Olivier (Sleuth) received an Academy Award nomination for his chilling portrayal of Szell, who turns dental instruments into tools of torture with dispassionate ease. Directed by John Schlesinger (Billy Liar, Midnight Cowboy, The Day of the Locust), Marathon Man moves with nail-biting suspense to its gripping, fever-pitched conclusion. Featuring Roy Scheider (Jaws), William Devane (Rolling Thunder), Marthe Keller (Black Sunday) and the extraordinary cinematography of Conrad Hall (Electra Glide in Blue). 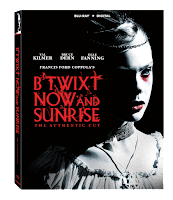 🙀B’TWIXT NOW AND SUNRISE arrives February 28 on Blu-ray + Digital from Lionsgate.
Directed by film legend Francis Ford Coppola (The Godfather films, Apocalypse Now, The Conversation), B’Twixt Now and Sunrise arrives on Blu-ray + Digital February 28 from Lionsgate. As described by Coppola, “The Authentic Cut of ‘B’Twixt Now and Sunrise’ is a story more personal to me.” The enthralling gothic thriller follows a down-on-his-luck writer who is visited by a ghost and becomes immersed in a local murder mystery while promoting his latest novel. Starring the acclaimed Val Kilmer alongside an eclectic cast that includes Academy Award and Primetime Emmy Award nominee Bruce Dern (Academy Award: 2013, Best Actor, Nebraska; Primetime Emmy: 2011, Outstanding Guest Actor in a Drama Series, “Big Love”), and Elle Fanning, with iconic musician Tom Waits narrating.
Posted by D.M. Anderson at 2:55 PM