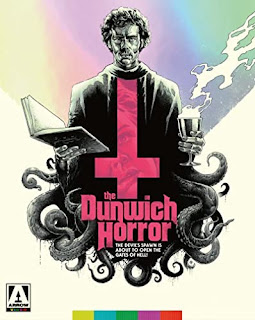 H.P. Lovecraft’s work has always been pretty trippy, as is this adaptation of one of his most famous tales. However, its overall trippiness has more to do with the era when it was made than the story itself.

The Dunwich Horror is an early attempt to bring Lovecraft to the big screen, courtesy of Samuel Z. Arkoff & friends. And if that name rings a bell, you’re probably aware that he and his partners-in-crime at American International Pictures specialized in cranking out budget-conscious films in a variety of genres. In the late 60s and early 70s, many of their movies were acid-laced with a psychedelic aesthetic that assured they’d be period pieces within just a few years.

This one is a hippy-dippy slice of horror that distills and simplifies the source material to accommodate its budget while tossing-in goofy dream sequences and titillating sexuality. Dean Stockwell plays Wilbur Whateley, the creepy descendant of a man who was obsessed with summoning “The Old Ones,” malevolent beings from another dimension. Picking up where dear ol’ Dad left off, he coerces naive college student Nancy (Sandra Dee) to his home in Dunwich with the intention of using her body to finish the job and bring these creatures into our world. When her professor, Dr. Armitage (Ed Begley), and best friend, Elizabeth (Donna Baccala), go looking for her, they learn of the Whateley family’s dark past and Wilbur’s intentions.

Depending on one’s tastes (or state of mind), the frequent psychedelic embellishments are either mood enhancing or a major distraction. Either way, the story sometimes transcends its dated elements, particularly when digging into the Whateleys’ history (which has terrified the God-fearing folks of Dunwich for years). Less engaging are the performances. Begley looks like he’s there for the paycheck, while Dee demonstrates the thespian skills of a mannequin. Stockwell, however, is a real hoot, especially when trying to appear suave and mysterious. He also engages in some prime scenery chewing during the climax.

Like a lot of Lovecraft adaptations - old and new - The Dunwich Horror is somewhat hampered by its budget and a tendency to deviate from the original story. Then again, his writing has always featured settings, creatures and imagery that are a challenge to depict to the big screen, so we won’t hold that against it. And though it looks downright archaic today, the film is a decent early attempt to adapt one of his stories, which will be of considerable historical interest to Lovecraft fans. In addition to a solid video & audio restoration, Arrow Video includes bonus features that are both entertaining and insightful. Fire up a fat one and enjoy.

“THE DOOR INTO DUNWICH” - Running over two hours, this is a Zoom conversation between comic book artist Stephen R. Bissette and author Stephen Laws. Mostly pretty interesting, though a bit exhausting after a while.

“AFTER SUMMER AFTER WINTER” - Interview with author Ruthanna Emrys,who compares the film to the Lovecraft story.

“THE SOUND OF COSMIC TERROR” - A look at Les Baxter’s score.

SUPPLEMENTAL BOOKLET - Not available for review.