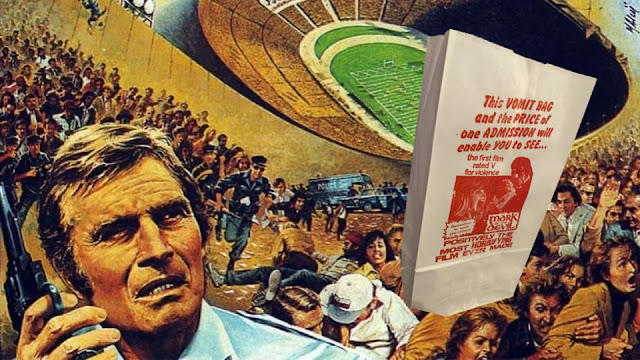 You know what I miss? Gimmicks that sneaky studios and profit-minded producers once used to dupe folks into seeing a movie that wouldn’t have been any good otherwise. Producer William Castle was the master, of course, offering such goofy goodies as fright insurance policies for patrons of Macabre and rigging theater seats with makeshift buzzers for The Tingler.

Such gimmicks were mostly before my time, though I did catch John Waters’ Polyester in “Odorama” when I was in high school. We were given a scratch-n-sniff card, and when a number flashed on the screen, you scratched the corresponding number on your card to smell what was happening in the scene (including roses, pizza, farts and feet). I would have kept mine, but the combination of odors still wafting from the card on the way home was so nauseating that I ended up throwing it out the car window. 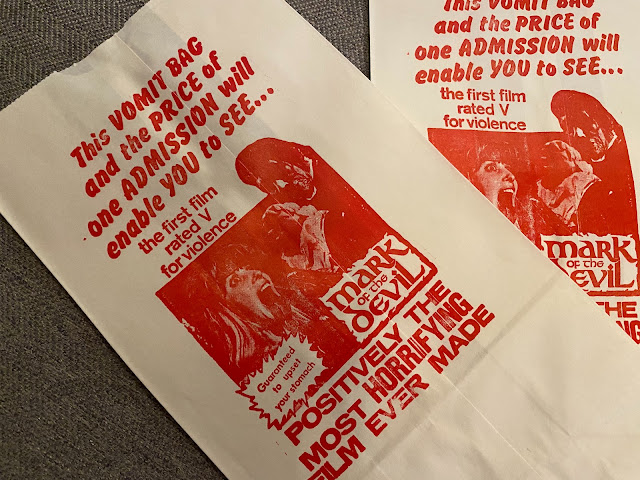 Luckily, some of these things can be found if you know where to look. Alas, no Odorama cards for a price I was willing to pay, but I did find a couple of vomit bags promoting the 1970 schlockfest, Mark of the Devil, which touted the film as “guaranteed to upset your stomach.” Going for five bucks on eBay, they’re probably reprints, but who cares? I sure as hell wouldn’t want a used one.

It was a promotional tool for several "extreme" horror films, but by the time I was old enough to see any of them, barf bags were just another bygone gimmick from another era. Too bad, really, because I'd be first in line at a theater just to get one, and I think a lot of other horror fans would, too. It doesn't matter whether or not the movie actually necessitated a vomit bag...it would make a great souvenir. 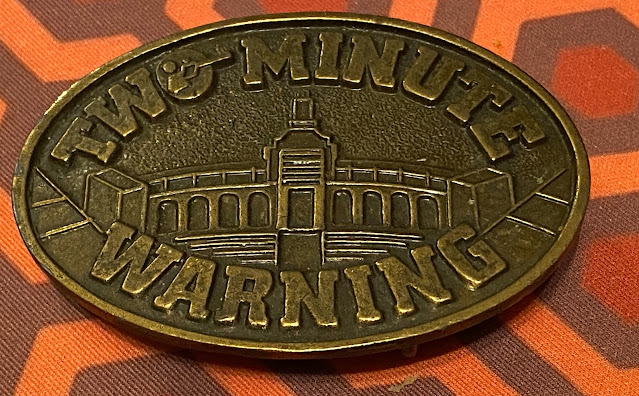 During the same shopping session, I found a Two-Minute Warning brass belt buckle. These things were given to crew members after working on the 1976 film, which is one of my childhood favorites. There’s even a thank you from director Larry Peerce & producer Edward S. Feldman etched on the back. It seems like an odd way to express your appreciation. One would think something like a watch or bottle of champagne would be more generous. I never met anyone grateful to receive a fucking belt buckle.

Am I gonna wear it? Hell, no. Buckles like this went out of fashion roughly around the same time disco died, but since I continue to carry a nostalgic torch for the film - though few other people do - it has a place of honor in one of my Dave Cave display cases.