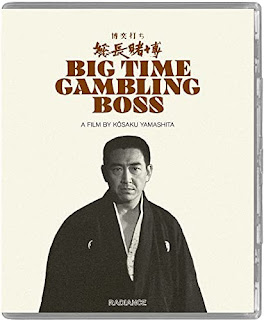 One of the great things about being a cinephile is thinking you know everything, then discovering that you don’t, which opens up a whole new world of movies you weren’t aware of.

So, confession time. While I have more knowledge of foreign films than the average American moviegoer and I have seen a Yakuza film or two, I had no idea that it was a hugely popular subgenre in Japan, especially during the 60s and 70s. Big Time Gambling Boss is only one of many Yakuza films released by Studio Toei, and if this one is indicative of the others, I see some movie marathons in my future.

Big Time Gambling Boss is not the slab of exploitative action that its stupidly-translated title suggests, nor is it a sweeping, epic crime saga. The film is something in between, with a compelling story of respected clan member Nakai (Koji Tsututa), who turns down the opportunity to oversee the five local gangs, instead suggesting Matsuda (Tomisaburo Wakayama), a senior member about to be released from prison. However, the counsel selects a lower ranking boss, Ishido (Hiroshi Nawa), who reluctantly accepts.

This doesn’t sit well with Matsuda, a reactionary hothead who lets his wounded pride turn into a vendetta against Ishido. The counsel relies on the more level-headed Nakai to keep the piece, which grows increasingly difficult because Matsuda simply can’t get out of his own way. However, Matsuda’s not the actual antagonist here, as revealed later when the council’s real intentions are made known.

Though occasionally violent, the emphasis is more on the relationships between friends, family & clan members, as well as the workings of these organizations. The plot is intriguing and complex, as are the performances by the entire cast. In some ways, the film reminded me a bit of The Godfather. Part of that could be the score, which sounds very much like Nino Rota, but I think such a comparison also derives from the themes of loyalty vs. friendship, as well as a growing feeling that the fates of these characters are inescapable from the offset.

That’s not to say it’s as great as The Godfather. Not even close. But as a tough, intriguing and occasionally tragic piece of pulp fiction, Big Time Gambling Boss is excellent. If the other Studio Toei Yakuza films are this good, consider this guy a new fan.