CLOVERFIELD (4K SteelBook): One for the Collectors 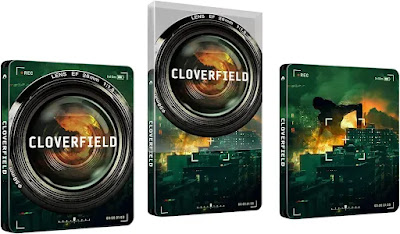 Subjectively, Paramount has been putting out some of the cooler SteelBooks lately, with creative packaging and vivid new artwork. Recent examples include the colorful minimalism of Pulp Fiction and the elaborately designed Event Horizon.

The new packaging for Cloverfield is similar to the latter, with a transparent slipcase featuring the title & a beheaded Statue of Liberty inside a camera lens. The book itself reveals the Cloverfield monster rampaging through the fiery streets of New York, designed to appear as if being caught on camera. Overall, it’s pretty striking artwork to commemorate the film’s 15th Anniversary. Since the movie itself isn't significantly upgraded from previous Blu-ray or 4K releases, this one is obviously intended for SteelBook collectors.

Revisiting Cloverfield today was a nice reminder that, at one time, it was simply created as a monster movie, not part of a sci-fi universe shared by tenuously linked “sequels” (with an ongoing story arc apparently known only to producer J.J. Abrams). While I’ve enjoyed each film in the franchise - even the critically maligned Cloverfield Paradox - the original remains the most purely visceral experience, largely due to its disorienting cinema vérité style and the emotionally driven - often dumb - decisions of its characters.

Cloverfield is also one of the few found footage movies that’s actually any good. Found footage was already an overused gimmick by 2008, used by would-be auteurs motivated more by finances than creativity. But here, it is utilized to great effect, putting us right there at ground zero with its characters, seeing only what they see, receiving information only when they do. A single POV camera is also a remarkably clever way to slowly reveal the monster, which we mostly only see in quick, shaky glimpses until the climax. Without Abrams and director Matt Reeve’s creative use of found footage, Cloverfield would be just another unremarkable monster movie (probably a phony looking one, at that).

This is the second time Cloverfield has been released on 4K, and I’m not sure how much found footage actually benefits from the format. The film was initially shot with low-resolution cameras, something 4K isn’t gonna substantially improve (and would we want it to?). Additionally, all of the bonus features are carried over from previous Blu-ray releases, which means this disc is essentially an aesthetically pleasing 15th Anniversary souvenir. SteelBook collectors will appreciate it, but everyone else might find it superfluous.

“SPECIAL INVESTIGATION MODE” - Watch the film with pop-up info. I always liked these.