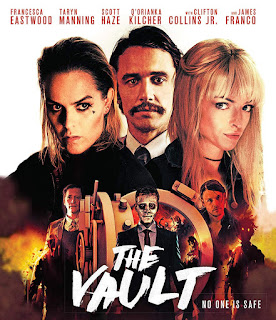 Aside from its setting, this heist/horror hybrid doesn’t really break any new ground, but for most of its running time, The Vault is pretty entertaining, even creepy at times. If only it knew when to quit.

Bickering sisters Leah (Francesca Eastwood, Clint’s kid) and Vee (Taryn Manning) lead a heavily-armed crew attempting to rob a downtown bank, which turns into a hostage situation after the police are tipped-off by a mysterious caller. Worse yet, their take isn’t nearly as much as they need to pay off brother Michael’s (Scott Haze) mob debts. However, the bank’s assistant manager (James Franco) informs them of an old vault in the basement, which holds $6 million.

But the bank has a dark past. There was a similar situation in 1982 where a masked robber executed all of his hostages. Their disembodied spirits have been lurking around ever since. As they try and crack-open the vault, the crew starts meeting violent ends at the hands of the undead. None of this comes as a surprise to the assistant manager, who seems to have known this would happen all along.

After an inauspicious start, The Vault gets more interesting as the story unfolds, revealing nifty narrative surprises along the way. The film is never particularly scary, but does manage to build some tension and dread, particularly in the long, dark corridors leading to the vault itself. The performances are merely perfunctory, but regarding the three siblings, at-least there’s some attempt at character development so we have a small stake in who lives and dies.

And had the film ended just one scene earlier, it could have been something special.

Granted, a single scene doesn’t necessarily wreck an entire film, but in a genre where the tone is often more important than the plot itself, one wonky moment can seriously undermine things. Without getting into specifics that would spoil the party, near the end of the film, there’s a plot-twist that’s creative, clever and makes complete sense within the context of the story. The scene immediately cuts to black, and had the credits rolled right there, the movie would have ended on a haunting, ominous note. Instead, we get a ridiculous coda that feels tacked-on for the sole purpose of providing a gratuitous jump-scare.

I wouldn’t go so far as to say The Vault is ruined by this scene. However, in addition to being completely unnecessary, it doesn’t really jibe with the story’s basic premise. Until then, the film is interesting enough to make it worth checking out. Just shut it off right before that final scene (you’ll know the moment when it comes).