A Big Batch of BOGEY & BACALL 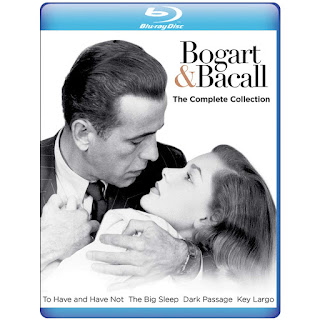 ON BLU-RAY FROM
WARNER ARCHIVE COLLECTION

Funny thing about Humphrey Bogart...he was never a traditional leading man. Bogey always looked like he'd be more at-home teaching high school biology, his distinctive voice eliciting chuckles from the class. But, damn, he was cool. With that kind of charisma, who the hell needed to look like a matinée idol? Kinda gives hope to the rest of us ordinary schmoes.

I highly doubt I could ever muster enough charm to hook up with the likes of the sultry Lauren Bacall, but Bogey's characters always made it look effortless. While their pairing must have looked awful on paper, their chemistry was indisputable (both on and off the screen). The four films they made together are all classics, of course. Bogart himself did better films before and afterwards, but these are arguably the highlights of Bacall's career and you'd be hard-pressed to name another screen duo who played off each other so well.

What that means is every film in Bogart & Bacall - The Complete Collection is a gem. Forced to choose, Key Largo would be my personal favorite because there's the added bonus of the great Edward G. Robinson, chewing up scenery in full gangster mode. Interestingly, this is also the only film bereft of a romantic subplot between the two leads. I'd never seen Dark Passage until reviewing this set and was surprised by the ample use of first-person point-of-view. As prison escapee Vincent Parry, wrong-convicted for killing his wife, we don't even see Bogart for nearly half the film. Still, it's a cleverly plotted story with film noir touches, particularly Bacall's turn as Irene, whose motives for helping him are ambiguously intriguing.

Speaking of plots, the one in The Big Sleep is so complex and puzzling that I always feel like I'm watching it for the first time, which is part of the fun. As cynical private detective Philip Marlowe, this is Bogey at his coolest, nearly unflappable until he locks horns - and lips - with Vivian Rutledge (Bacall). Of the four films, To Have and Have Not is probably the least essential, mainly because it travels the same road as Casablanca. Still, its two stars make an entertaining pair of morally questionable opportunists whose empathy for the French resistance during World War II grows over time.

Each of these classics have been individually available on Blu-ray for a few years, all with great transfers and the same extras first-included with the original DVD releases. This set from Warner Archive Collection doesn't throw in anything new, but it's attractively packaged and a lot less expensive than purchasing them separately. A must-own for any classic movie lover who's missing a few of them from their collection.

EXTRA KIBBLES
TO HAVE AND HAVE NOT - "A Love Story: The Story of To Have and Have Not" (featurette); Lux Radio Broadcast (radio adaptation); "Bacall to Arms" (Looney Tunes short and pretty un-PC by today's standards); Trailer.
THE BIG SLEEP - 1945 pre-release version (longer, with quite a few different scenes); Intro the the 1945 version by Robert Bitt; "1945/1946 Comparison" (also with Robert Gitt); Trailer.
DARK PASSAGE - "Hold Your Breath and Cross Your Fingers" (featurette); "Slick Hare" (Bugs Bunny cartoon...the one where Bogart wants fried rabbit for dinner); Trailer
KEY LARGO - Trailer
KITTY CONSENSUS:

MEE-OW! LIKE TAUNTING A MOUSE TO DEATH
Posted by D.M. Anderson at 3:52 PM