THE POOP SCOOP: A "NATURAL" for 4K plus Other Upcoming Releases 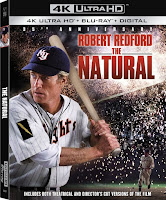 THE NATURAL 35TH ANNIVERSARY on 4K 6/4
THE NATURAL debuts on 4K Ultra HD and in 4K via participating Digital platforms June 4 from Sony Pictures Home Entertainment. Robert Redford stars as man who seemingly comes out of nowhere to become a legendary baseball player with almost divine talent in this classic film that also stars Robert Duvall, Glenn Close in an Academy Award-nominated performance and Kim Basinger. THE NATURAL was nominated for four Academy Awards, including Best Cinematography and Best Original Score, both vibrantly presented as part of this all-new 4K presentation.  The 4K Ultra HD disc includes both versions of the film: the original Theatrical version and the Directors Cut, each fully restored from the original camera negative, supervised and approved by Director of Photography Caleb Deschanel and Director Barry Levinson. Both versions of the film also include newly remixed Dolby Atmos audio, along with the original stereo and 5.1 tracks for the Theatrical version.  THE NATURAL includes hours of archival special features, including a variety of featurettes that go inside the making of this iconic classic and its greater context within baseball history and mythology. 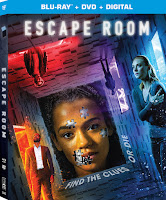 ESCAPE ROOM on Digital 4/9 & Blu-ray/DVD 4/23
Centered on six strangers who must uncover wickedly designed puzzles and overcome life-threatening challenges set in hazardous environments, with plenty of twists and turns, the ESCAPE ROOM Blu-ray, DVD and Digital releases feature a never-before-seen Alternate Ending and Opening, six deleted scenes and four featurettes. Hear from director Adam Robitel and the cast about how the film’s 360-degree architectural spaces prove to be some of the most adversarial characters imaginable in “Games, Set, Match.” Then, learn about how Escape Room was built with practical effects and no green screens as the cast and crew dives deep in “The Lone Survivors.” 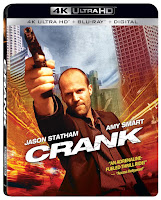 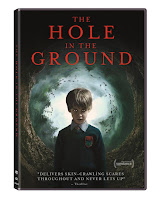 THE HOLE IN THE GROUND on DVD 4/30
Expertly crafted tension and paranoia take full effect in The Hole in the Ground, arriving on DVD April 30 from Lionsgate. After disappearing from his mother, a son returns home seemingly unharmed, but his mother fears the boy who has returned might not be her son at all. From writer-director Lee Cronin (Ghost Train), this ominous, original and Rotten Tomatoes Certified Fresh™  film “delivers skin-crawling scares throughout” (Dan Jackson, Thrillist) and stars Seána Kerslake, James Cosmo, and James Quinn Markey.
Posted by D.M. Anderson at 1:46 PM