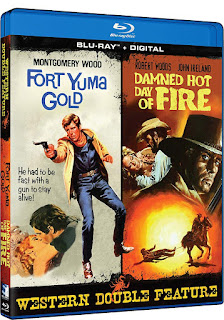 On Blu-ray from MILL CREEK ENTERTAINMENT

When it comes to spaghetti westerns, Sergio Leone is at the top of the ladder, of course. Everyone else is at least a couple of rungs lower and some never even learned to climb. The two films in this single disc collection fall somewhere in the middle. Both are pretty obscure, though some genre fans may recognize them under different titles.

Fort Yuma Gold's actual on-screen title is Per Pochi dollari ancora, or For a Few Extra Dollars. It just goes to show you that The Asylum didn't have the market cornered on derivative titles. Still, we won't hold that against it. Pretty-boy hero Gary Hammond (Giuliano Gemma) is more Tom Brady than Clint Eastwood, but the film itself is entertaining enough. Perhaps even a bit tongue-in-cheek, as demonstrated in a gloriously over-the-top barroom brawl, or the film's voluptuous main female lead, Connie Breastfull (Sophie Daumier), a Bond-girl name if there ever was one.

The awkwardly-named Damned Hot Day of Fire sounds like a kid learning to use swear words. It's onscreen title, Gatling Gun, is more accurate since it involves disgraced captain Chris Tanner (Robert Woods) on a mission to retrieve both the weapon and its kidnapped inventor. Veteran John Ireland is also on-hand as a sociopathic bad guy. There's plenty of action and Tanner beds-down every woman in the cast, though this one wears out its welcome pretty quickly  because it takes itself a little too seriously. Additionally, portions of the original English-dubbed audio track were apparently lost, so some scenes are in Italian with subtitles.

And be forewarned...the picture and sound for both films is relatively poor for a Blu-ray transfer. It doesn't look like much, if anything, was done to restore either of them. But maybe that's par for the course. If Leone's classic westerns are fine Italian cuisine, then Fort Yuma Gold & Damned Hot Day of Fire are cans of Chef Boyardee: Simply edible, sometimes enjoyable, and extra spices won't significantly improve the taste.