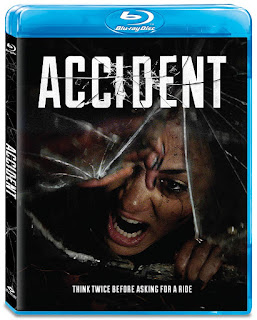 On Blu-ray from WELL GO USA

Accident has a great premise and one good scene. That's it. The title could cheekily refer to how clumsily the film was thrown together.

Jess and Caroline are two dumb bimbos hitching a ride to a concert with a couple of even dumber dudes, Fred and Thomas, who "borrowed" a sports car for the weekend. Unfortunately, they have an accident and get trapped in the overturned vehicle at the bottom of a ravine. Making matters worse...those who actually own the car are gangsters who've stashed something extremely valuable inside, and they want it back.

The aforementioned one good scene is the crash itself, filmed from inside the vehicle. It hits another car before rolling end-over-end down a steep wooded hill. In loving slow-motion, we see passengers bouncing around inside among debris and shattered windshield glass.

It comes to rest - upside-down - near the edge of a cliff. However, in what might be the worst continuity error of all time, three of the four passengers are trapped inside, unable to break through the windows that shattered only one scene earlier. Miraculously, Fred was apparently thrown out on the way down. Through what, an air vent? Dumber still, Thomas eventually manages to force a window open and shimmy his way out, yet despite being unrestrained, Jess and Caroline remain helplessly trapped inside the car. It never occurs to either of them to simply follow his lead.

Never mind the uniformly terrible performances and aggressively stupid characters. First-time writer/director Dan Tondowski is his own worst enemy, patching together his story with bone-headed logic and little regard to anything resembling plausibility. Consider this:
I could go on, but you get the idea. It's as though every scene was written on-the-fly without referring to the script's previous pages to make sure it doesn't contradict what's already happened. Accident is almost completely devoid of narrative logic, plausibility, pacing and continuity. Which is a shame because it's technically competent and the basic concept is solid. Instead, what could have been a tense, tight little thriller ends up being a mind-numbing assault on the viewer's intelligence. At best, this is good for a few incredulous chuckles at its own expense.

BLEH...LIKE COUGHING UP A HAIRBALL.
Posted by D.M. Anderson at 6:55 PM