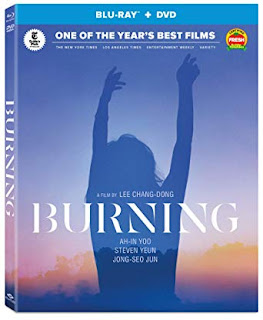 In addition to one of its plot developments, the film's title could also refer to the deliberate pace at which it unfolds...as in slow burning. Sometimes there's nothing better than a moody thriller that methodically builds tension by taking its sweet time. But for a film where we're pretty sure how everything will unfold with over an hour left to go, Burning might be too much of a good thing.

Jong-su (Yoo Ah-in) is an introverted college graduate who aspires to write a novel, but mostly struggles to find a job. He bumps into childhood neighbor Hae-mi (Jeon Jong-seo), and after a brief sexual encounter, he agrees to feed her cat while she's on vacation. Jong-su becomes creepily infatuated with her, as his frequent visits to her apartment demonstrate. Hae-mi later returns with new friend Ben (Steven Yeun), who's charismatic, carefree and wealthy...everything Jong-su isn't. But he's also quite mysterious; neither Jong-su or Hae-mi know much about him or what he does for a living.

Despite Jong-su's apparent misgivings, the three spend an increasing amount of time together, the most crucial moment being a pot-fueled evening at Jong-su's childhood home, an old farmhouse he's charged with caretaking after his father goes to jail. This is where Jong-su - and the audience - learn that neither Hae-mi or Ben are quite what they seem. When Hae-mi disappears afterwards, Jong-su becomes obsessed with finding her and suspects Ben knows more than he's leading on.

The film made a lot of best-of lists last year and I can see why. Burning is impeccably acted by its three leads, whose characters are almost the entire focus of the film. Through numerous scenes of almost mundane conversation, we learn a lot about them, though Ben's ambiguous background makes him the most intriguing character. Additionally, director Lee Chang-dong establishes a tone that borders on surreal and suggests - just beneath the surface - there's something not-quite-right with these people.

However, the film is sometimes maddeningly meandering. At nearly two-and-a-half hours, Burning is way too long. Unless your film is some kind of character study - which, admittedly, could be part of Chang-dong's agenda - 90 minutes shouldn't go by before anything resembling an actual plot begins to present itself. Some narrative developments are obviously created to bait or mislead the viewer, which is initially understandable. But since we're pretty certain of the film's ultimate outcome by now, the main purpose they serve is to keep the viewer expecting a revelatory twist ending.

I suppose that's not necessarily a bad thing, but it does render the inevitability of the climax rather underwhelming. Still, Burning is mostly worthwhile. The film is sometimes quite fascinating, mostly due to the performances and subtle tension created in key scenes. I just wish it would have gotten to the point a little sooner than it actually does.