THE QUAKE on Blu-ray, DVD & Digital 3/19
THE WAVE was only the beginning. The ground beneath the residents of Oslo, Norway can’t be trusted. For Norwegian geologists like Kristian Eikjord (Kristoffer Joner, The Wave), studying the daily quakes proves that it's no longer a matter of if, but when the next catastrophic event will strike. Will it surpass the 5.4 magnitude earthquake that devastated the city in 1904? Can anyone survive it? The Quake follows Kristian as he makes a perilous attempt to help his wife, daughter and others escape a crumbling skyscraper when nature takes its course. 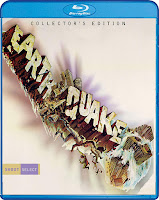 EARTHQUAKE (1974) - COLLECTOR'S EDITION on Blu-ray 5/21
Including a new transfer of the extended television version with over 35 minutes of added footage! Charlton Heston leads an all-star cast in an epic film about ordinary citizens who must come together in the face of an unstoppable natural disaster! When the most catastrophic earthquake of all time rips through Southern California, it levels Los Angeles and sends shockwaves through the lives of all who live there. Now strangers must become saviors as the city struggles to get to its feet before the next terrifying aftershock hits! Also starring Ava Gardner, George Kennedy, Lorne Greene, Victoria Principal, Geneviève Bujold and Richard Roundtree, Earthquake combines outstanding performances with Academy Award-winning sound and groundbreaking special effects. 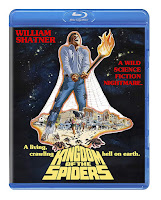 KINGDOM OF THE SPIDERS on Blu-ray 3/26
Television legend William Shatner (TV's Star Trek, T.J. Hooker and Boston Legal) stars as vet "Rack" Hansen in this cult classic about an Arizona town infested with a horde of arachnids that turn on the humans. After livestock belonging to Rack's friend Walter Colby (Woody Strode, The Italian Connection. The Ravagers, The Professionals) Fall victim to a spider attack, entomologist Diane Ashley (Tiffany Bolling, Wild Party) arrives and tries to help Rack deal with the crisis. But with the big county fast approaching, Mayor Connors (Roy Engel, The Man from Planet X) refuses to let them quarantine the Colby's ranch. Soon the remaining residents of the town must barricade themselves to stave off the eight-legged invaders in the ultimate man vs. arachnid showdown! 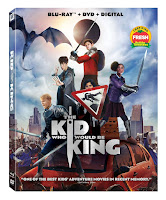 THE KID WHO WOULD BE KING on 4K Ultra-HD, Blu-ray and DVD 4/16
Old school magic meets the modern world in the epic family-friendly adventure, The Kid Who Would Be King. Alex thinks he’s just another nobody, getting bullied at school and told what to do by his teachers, until he stumbles upon the mythical Sword in the Stone, Excalibur. Now, with the help of the legendary wizard Merlin, he must unite his friends and school yard enemies into an allied band of knights to defeat the wicked enchantress Morgana. With the future at stake, Alex must become the great leader he never dreamed he could be and save the world. 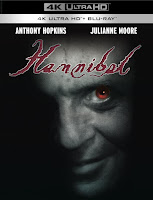