LIFE IN THE DOGHOUSE: An Ongoing Rescue Mission 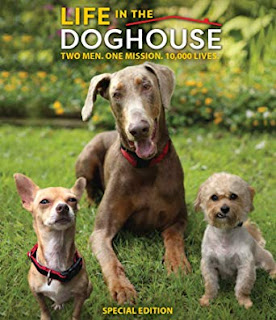 On Blu-ray from FILMRISE/MVD VISUAL

GUEST REVIEWER: Murphy, the Worried Wheaten (none of our cat staff would touch this one).🐕

At the time this documentary was shot, Ron Danta and Danny Robertshaw are sharing their ranch home with over 75 dogs. And yeah, they explain how exhausting it is keeping the house from smelling like a pet store.

Every day, they individually feed, exercise and care for each one of them. But these guys aren't hoarders. When not training show horses, Ron and Danny have rescued over 10,000 dogs over the years, mostly from shelters, abusive/neglectful owners and, most heroically, animals abandoned during Hurricane Katrina.

Life in the Doghouse is a charming documentary about what's become their life's work, mostly accomplished at their own expense, not only to save as many dogs as possible, but adopt them out. Those they can't place with new owners simply live at the ranch. Amusingly, these pooches appear to have the run of the place. There's not a single kennel to be seen.

We meet a lot of the two men's furry friends, new and old, all of which seem to appreciate their new leases on life. While Ron & Danny's relationship with these animals is heartwarming, the film is sometimes appropriately somber when they discuss some of the animal cruelty they've encountered, or provide alarming euthanasia statistics.

The film is just as much about Ron and Danny as it is about the dogs. They've been a couple for over 20 years and, as gay men who've endured a lot in their lives, one might come to the conclusion they sort-of rescued each other, as well. Less interesting are the segments involving their "day jobs" as horse trainers. Nothing personal against the ponies, but hey...they don't tug at our heartstrings quite like the plethora of pooches.

Watching the film makes one wish there were more folks like these two guys, selflessly saving as many wayward dogs as possible, no matter how homely or adorable. Their story is engaging, sometimes bittersweet, and a must-watch for animal lovers.