THE GLASS BOTTOM BOAT and the Disturbing Doppelganger 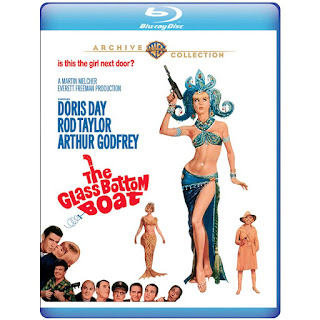 I’ve seen a lot of Doris Day movies, mostly thanks to my sister. Growing up in the 70s, she used to love old comedies and musicals that our local independent station – KPTV Channel 12 – would air all the time. When they weren’t rerunning old episodes of Gilligan’s Island, Star Trek and Perry Mason, films from the 50s and 60s filled the schedule. If it was a swingin’ sex comedy, rockin’ Elvis musical or Jerry Lewis screechfest, Rebecca was plopped in front of the hand-me-down black & white in the bedroom we shared. Hence, I was often subjected to those same swingin’ sex comedies, rockin' Elvis musicals and Jerry Lewis screechfests.

Then of course, there was Doris Day, who seemed to pop-up on the tube every Saturday afternoon. While I don’t have anything personal against her, she always bore a striking resemblance to my mother...the same perky smile, the same eyes, the same blonde bob hairstyle. I don’t have anything against my mother either, but hey...she’s Mom. Ergo, it was impossible for me to accept Day as a sexy love interest.

The story has Day playing Jennifer Nelson, a lonely widow who works in public relations at NASA while moonlighting for her dad (Arthur Godfrey) as a mermaid during boating tours. After an amusingly awkward meeting with rocket scientist Bruce Templeton (Rod Taylor), he eventually hires her to write his biography. Of course, they become smitten with each other, but a string of circumstances has his colleagues suspecting she’s actually a Russian spy. Meanwhile, real Russian spies are trying to get-hold of Bruce’s research.

Again, some of this is amusing. Other times the comedy is so broad that I almost expected a laugh track. Still, Day is her usual sunny self and Taylor is...well, Rod Taylor, a serviceable leading man when Hudson or Garner are unavailable (though I still can’t see what these handsome hunks see in someone that looks like Mom). Dom DeLuise also has a few funny moments in an early comedic role. However, third-billed Arthur Godfrey is hardly in the movie at all.

While it was successful, The Glass Bottom Boat is ultimately one of Doris Day’s lesser comedies. It isn’t bad, but relies a bit too much on slapstick and lacks the congenial charm of, say, Pillow Talk or Send Me No Flowers. Still, I’m certain people like my sister Rebecca would have more nostalgic fondness for the movie than a guy with Mom issues.

EXTRA KIBBLES
VINTAGE PROMOTIONAL FEATURETTES - “Catalina Island” (mostly a travelogue of the island, with a few behind-the-scenes clips); “Every Girl’s Dream” (a beauty queen tours MGM studios); “NASA” (features Doris Day and contains a few bloopers and scenes from the film).
CARTOON – “The Dot and the Line” By Chuck Jones
TRAILER
KITTY CONSENSUS: