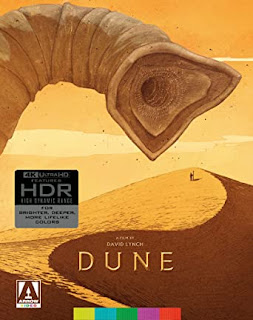 Our love-hate relationship with 1984’s Dune is rekindled with his loaded limited edition boxed set. In addition to a beautiful 4K restoration, there’s plenty of supplemental material to support any argument in the ongoing debate over the artistic merits of this still polarizing film.

Helmed by perpetually psychotic David Lynch (he did turn down Return of the Jedi to direct this), Dune is his infamous, $40 million trainwreck that bombed in theaters when released in 1984, but has since built a massive cult following. Adjusting for inflation, it might be the priciest cult film of all time. If someone were to go back in time to inform Lynch that Dune would still be debated, scrutinized and revisited decades later, he’d naturally assume they took too many hits from Frank Booth’s gas canister.

Speaking of love-hate...God knows there’s plenty of both. To call Dune convoluted and confusing would be an understatement. Why else would Universal hand moviegoers a glossary when it was first released (even though no one reads in the dark)? Then there’s the plethora of distracting, clumsy and mostly redundant character voiceovers peppered throughout. The performances range from effective & understated to hammy & histrionic, the latter of which could also describe some of the chuckleworthy dialogue (“The tooth...the tooth...the tooth!”). And considering this is the post-Star Wars era, the special effects are sometimes laughably clumsy.

On the other hand, Dune remains consistently beautiful to look at - like an eerie sci-fi painting - including the scenes which wallow in ugliness. Even today, it’s a triumph of production design. Especially impressive are the striking contrasts among the three worlds depicted in the film. And while the FX are occasionally dubious, they’re just-as-often spectacular. Elsewhere, the make-up, costumes and lush score (by Toto, of all people) also contribute to make Dune compulsively watchable, despite its narrative shortcomings. And I don’t care what anyone says...those sandworms are fucking awesome.

The film’s aesthetic attributes really pop in 4K (as do Baron Harkonnen’s pustules). Considering Dune’s longtime reputation for visual bleakness compared to other sci-fi spectacles of the era, I was surprised by the vibrant colors prominent in certain scenes, as well as sharp background details I never really noticed before. Still, the primary shades are brown and yellow, but even those scenes are more vivid than Universal’s previous Blu-ray release. The two audio tracks (2.0 and a 5.1) are equally impressive.

Arrow Video has assembled another outstanding limited edition package that features new minimalist artwork. There’s also a big batch of new and archival bonus features, the latter culled from various previous releases. One minor quip...it’s too bad the even-more notorious extended cut - the one where Lynch had his name removed from the credits - isn't included. Surely there was enough room on the accompanying Blu-ray disc to throw that in for posterity.

Regardless of one’s opinion of Dune - flawed masterpiece, delirious debacle or something in between - this (nearly) comprehensive set not-only makes the film worth re-examining (again!), the stories surrounding its tumultuous production are just as fascinating. Like a few previous Arrow boxed sets showcasing questionable classics - such as last year’s Beyond the Door - you don’t necessarily have to love the film to love the product.

2 SIDED POSTER - With new and original artwork (I still haven’t decided which side I’ll be framing for display...they’re both gorgeous).

REVERSIBLE COVER ART - With the same new and original artwork.

MEE-OW! LIKE BEING TURNED LOOSE IN A BIRD SANCTUARY.
Posted by D.M. Anderson at 9:17 PM