THE GANG & THREE MEN TO KILL: What? He Did More Than a Bad "Airport" Movie? 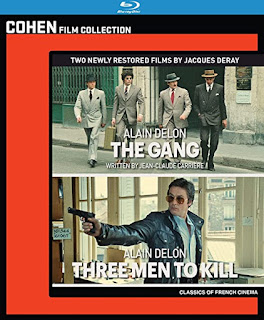 Some of us ignorant Americans might only recall Alain Delon from the small handful of English language films he did in the ‘60s & ‘70s (the only one all I ever saw was The Concorde: Airport ‘79!). He never did make much of an impact on this side of the pond. But in Europe, he’s a living legend. In his heyday, Delon might not have been a versatile actor, but he had shit-tons of charisma and sex appeal, both of which are on display in these two mid-career crime thrillers.

1977’s The Gang features Delon as Robert, the cocky and reckless leader of the Front Wheel Drive Gang. Taking place in post-war France, these guys commit a series of high profile robberies, sometimes two in a single day. Meanwhile, Robert strikes up a whirlwind romance with Marinette (Nicole Calfan). Eventually, there’s a tense stand-off with police at a countryside inn. Though leisurely paced, this is an entertaining film with a likable band of bad guys. Even with a bit of thinly-disguised commentary about French immigration policies, the overall tone remains pretty light. A couple of quips, though...the awful score sounds like something you’d hear during couples-skate at a roller rink, and what the hell’s up with Delon’s goofy afro?

In Three Men to Kill, Delon plays Michel Gerfaut, a professional card player who saves a stranger’s life one night. It turns out, however, the man was one of three to be murdered by a powerful arms dealer named Emmerich (Pierre Dux), who now believes Michel is a mercenary working for the other side, hired to disrupt the sale of faulty missiles. While on the run, Michel enlists the help of a former cop to learn who’s trying to kill him. This film is more violent and action oriented than The Gang, with a solid performance by Delon and lovely window dressing provided by Dalila Di Lazzaro, who plays his girlfriend. For the most part, the film is exciting and fast paced, though marred by a pointessly downbeat coda. Talk about your sucker-punches!

Certainly products of their time - and indicative of the films Alain Delon was making back then - neither of these are classics of French cinema, just well-made and enjoyable crime thrillers. For those unfamiliar with his lengthy body of work, they serve as a nice introduction. And at the very least, he’s more convincing as an antihero than sharing a cockpit with George Kennedy.

Excellent! Amazing! I’ll bookmark your blog and take the feeds also. I’m happy to find so many useful info here in the post, we need work out more techniques in this regard, thanks for sharing. Moving from California to Idaho