CHARIOTS OF THE GODS: In the Beginning... 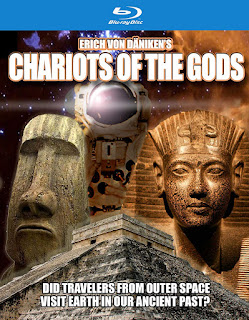 ...there was Chariots of the Gods?, a book in which author Erich von Däniken speculated that many ancient civilizations’ greatest architectural achievements were actually the work of visiting aliens. It was a global phenomenon, embraced by millions who believed everything they read...

...which begat the 1970 film, Chariots of the Gods (minus the question mark). Not only a huge hit, it earned a Best Documentary nomination at the 43rd Academy Awards, was re-released numerous times throughout the ‘70s and became very popular with imaginative kids who couldn’t be bothered to read…

...which begat Sunn Classic Pictures, a fledgling studio which repeatedly took the same concept to the bank, cranking out such urgent exposés as The Outer Space Connection, The Bermuda Triangle and The Lincoln Conspiracy. Relatively inexpensive to produce, these “documentaries” would roll into town for a couple of weeks to swiftly relieve eager kids of their lawnmowing money.

I should know because I was one of those kids. Whether or not I was ever actually snookered by these cinematic shell games - I'll never tell! - they were a lot of fun, which gives this new Blu-ray a considerable amount of nostalgic value. Chances are many of those reading will feel the same.

As speculative documentaries go, Chariots of the Gods is the genre’s Citizen Kane...maybe not the very first, but easily the most influential, creating the template for films and TV shows to follow:

Really, no film checked-off all the boxes more effectively than Chariots of the Gods. Less overtly outlandish than its imitators, the film manages to retain the tone and manner of a traditional documentary (though the jazzy music score is sort-of distracting). Serving almost like a travelogue of unique ancient monuments throughout the world, from Egyptian pyramids to the stone faces of Easter Island to the massive shapes carved in the Peruvian desert, the film provides extensive historic details about each structure before tacking-on the suggestion that little green men had a hand in it.

In the end, viewer walks away no wiser than they were before, but the locations are interesting, as are assertions that in-no-way could some of these things be created without extraterrestrial help. Whether or not we believe it, they really are amazing technological & mathematical human achievements. And while the idea that it was ever considered Oscar worthy seems laughable, Chariots of the Gods is actually very well made for what it is. Today, the film remains an amusing blast from the past, harkening back to a time when simply asking “what if?” could plant butts in theater seats.

It’s influence is still being felt today, because Chariots of the Gods eventually begat half of History Channel’s TV current programming, shows with such titillating titles as The UneXplained, Inside America's UFO Investigations, Nostradamus Effect and over 190 episodes of Ancient Aliens. If this ambitious little German flick hadn’t come along first, the channel might still be boring us with actual history. What ‘s the fun in that?

MYSTERIES OF THE GODS - Feature length follow-up film from 1976, though not as much fun.