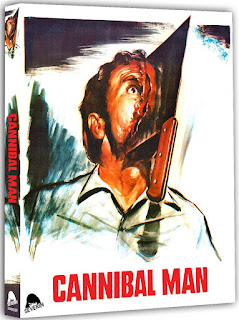 I get it...you’re a distributor with a movie titled Week of the Killer, which sounds more like a Columbo episode than a horror film. But hey, what a movie is actually about ain’t really your problem. All you gotta do is sell the thing, so why not go big with something like Cannibal Man? It has a good exploitative ring to it, and at the very least, the title alone is sure to get the British Board of Censors’ knickers in a twist. As the old saying goes, bad attention is better than no attention, and being labeled a ‘Video Nasty’ is practically free publicity.

That 1972’s Cannibal Man did-indeed earn a spot on Britain’s notorious Video Nasties list is laughable. Not-only is there no actual cannibalism, the violence is fairly tame compared to many of the other films on the list (though an early scene featuring slaughterhouse footage is stomach churning). Whoever declared it a Video Nasty clearly didn’t actually sit and watch the fucking thing.

I’m not even sure I’d consider it a horror film in the purest sense, and writer-director Eloy de la Eglesia seems to have just a bit more on his agenda than visceral thrills. Not that Cannibal Man isn’t horrifying - or sometimes horrifically funny - but it’s more of a distressing descent into madness triggered by a single unfortunate incident. Marcos (Vincente Parra) is a lowly slaughterhouse worker who gets promoted to operate a new meat-grinding machine that will greatly increase productivity while eliminating quite a few jobs. For him, it means he can afford to marry his girlfriend, Paula (Emma Cohen), and get out of the dilapidated shack he calls home, the last one standing among several fancy high-rise apartments.

While out with Paula one night, he has an altercation with a belligerent cab driver that results in the man’s accidental death. Paula thinks they should go to the police, but Marcos vehemently disagrees. When she defies him by announcing she’s going to, anyway, he strangles her to death. What makes the scene so shocking is there’s no foreshadowing that Marcos is capable of such an act. Until then, he was outwardly meek and soft spoken. Yet at the same time, because he immediately stashes her in the bedroom - seemingly without remorse - and continues with his life as if nothing happened, it’s apparent he’s had some seriously loose screws for a long time. The cabbie’s death was simply the catalyst which unleashed his dark side.

Marcos murders several others - including his own brother! - either because they discover his crime or suspicion has them nosing around the house. He keeps stashing the bodies in the bedroom, which soon becomes a problem when they start to smell. Fortunately for him, his new position at work provides the perfect way to dispose of them, Unfortunately, he can only haul them in a few pieces at a time in his gym bag, meaning Marcos’ entire house utterly reeks after a while (a morbidly funny running gag). Still, this doesn’t make him a serial killer. Even though we’re clearly dealing with a deeply troubled mind, it’s obvious he’d prefer not to have killed anyone in the first place.

Ultimately, Cannibal Man is more of a character study of a man whose life spirals out of control and the psychological impact of his actions. There’s also an interesting subplot involving Nestor (Eusebio Ponceia), a young gay man living in one of the highrises who’s attracted to Marcos. Whether or not the feeling is mutual, there’s a sequence where Marcos appears to be questioning his own sexuality, which might even have the viewer questioning his love of Paula. In an intriguing narrative sleight-of-hand, we initially assume Nestor is destined to be just another victim. Instead, this outwardly mundane friendship ends up being a key component in the final act, which is as revealing as it is unpredictable (and probably anti-climactic to viewers expecting more of a horror show).

Anchored by an oppressive tone, drab locations and a suitably low-key performance by Parra (who appears in nearly every scene), Cannibal Man is an uncomfortable viewing experience, yet we’re compelled to stick-it-out to see what makes Marcos tick. Despite its glaringly misleading title, this is not a film for would-be thrillseekers, though I suspect many who fall for the bait & switch will find it lingering in their heads a bit longer than a typical cannibal movie.

“CINEMA AT THE MARGINS” - A career overview of director Eloy de la Iglesia by Stephen Thrower and Dr. Shelagh Rowan-Legg.

“THE SLEAZY AND THE STRANGE" - Interview with film scholar Carlos Aguilar.

REVERSIBLE COVER - Other side features some of the original artwork, which was far more lurid.