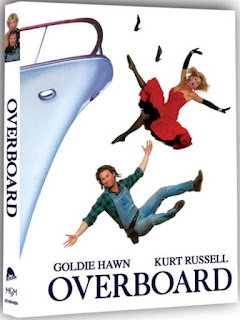 For those who actually pay attention to home video labels, it may come as a surprise that Severin Films would remaster and re-issue such a ‘mainstream’ movie, and a PG-rated romantic comedy at that. Severin’s specialty has always been resurrecting overlooked oddities and cult classics. But consider this...

While Overboard may have had mainstream aspirations, it did not achieve mainstream success, languishing unnoticed for a few weeks in suburban mallplexes and destined to be little more than a footnote on Garry Marshall’s resume. But a funny thing happened on the road to obscurity. Like Big Trouble in Little China and Army of Darkness, it found a huge audience at home. Perhaps not the same folks who worship at the altar of Bruce Campbell, but certainly legions of 'normal' folks who repeatedly made it part of Blockbuster movie night throughout the 90s.

Mention Overboard to almost any Boomer today and you’ll likely be met with a nod & a chuckle, maybe a fond recollection of a favorite scene. Not only was it remade more than once - badly - it’s even been referenced in other recent films. And let’s not forget Kurt Russell. You’d be hard-pressed to name another actor who’s starred in more films that sputtered at the box office, only for them to become enduring classics later on.

So Overboard is absolutely a cult film. Who cares if that cult mostly consists of soccer moms?

Decades later, Overboard is still compulsively watchable, partially because it so-closely adheres to common fish-out-of-water tropes that even newbies are certain of the outcome before the first act is over. Sometimes there’s comfort in predictability, especially when done well. Back then, few directors manipulated mass audiences quite as effectively as Garry Marshall. Like some of his more renowned films of the time -  like Beaches and Pretty Woman - Marshall puts such a congenial spin on familiar tropes that the film not-only transcends its genre, he makes us forget that Joanna Stayton (Hawn) is essentially a kidnap victim.

Of course, much of that enduring appeal is due to its two stars, who display just as much chemistry on-screen as off. Sure, many of us might prefer Russell grunting behind an eye patch, blowtorching aliens or gunfighting at the O.K. Corral, but he’s always been a funny guy with great comic timing. We don’t often see him in roles like this anymore. Romantic comedies have always more Hawn’s forte than Russell’s, so while she’s suitably amusing as a humbled former rich bitch and makes a good straight-woman to the Proffitt family’s antics, she ain’t really stretching herself here.

The actors’ sheer likability together goes a long way in making the Stockholm Syndrome aspects of the story go down a lot easier. Now that I think about it, perhaps the fact that Garry Marshall was able to turn potentially disturbing subject matter into a family film is another reason it achieved cult status to begin with. While I might be reaching a bit, it is ironic that Overboard has arguably become Marshall's most beloved, re-watchable film, yet has the creepiest underpinnings.

Overboard has been released on Blu-ray plenty of times before, but Severin Films gives it a nice facelift. Like a newly mastered album by your favorite band, you may already own a copy and know every beat by heart, but this one looks a little better, sounds a little cleaner. An interview with the screenwriter is also thrown-in for fans considering an upgrade.