SHADOW OF THE THIN MAN: Nick & Nora Go to the Races 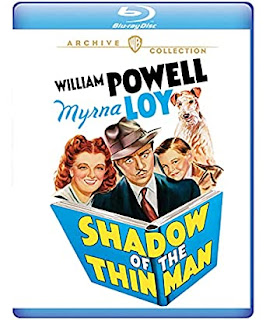 It’s great that Warner Archive now appears dedicated to putting out the entire Thin Man series on Blu-ray, even if it is only one film at a time. Shadow of the Thin Man is the third one released in 2021 alone (and the year ain’t over yet!). Perhaps it won’t be long until fans have all of Nick & Nora’s adventures on their shelves.

You’d be hard-pressed to name another franchise, new or classic, as remarkably consistent. The first remains the best, of course, simply because it was such a charming introduction to the Charleses, the perennially laid-back, quick-witted couple who continually manage to land themselves into perplexing murder cases. But the drop in quality in the subsequent sequels is negligible.

In fact, a strong argument can be made that Shadow of the Thin Man, the fourth in the series, is the best of the sequels. In this one, Nick (William Powell) is reluctantly coerced into investigating the death of a horse jockey who was suspected of throwing a race for “Link” Stephens (Loring Smith), a powerful racketeer. Soon after, a reporter with gambling debts is murdered while trying to extort Stephens, but rival reporter - and friend of the Charleses - Paul Clarke (Barry Nelson), is framed for the crime. Nick thinks the two are connected, and as usual, there are many suspects.

Like the rest of the series, the plot is born out of necessity in order to showcase Nick & Nora’s amusing banter and the two stars’ effortless chemistry. You might recall from the last film, Another Thin Man, that a baby’s been added to the mix. Here, Nick Jr. is a precocious toddler, resulting in a few very funny sidebars with Dad, such the latter forced to try milk with dinner instead of booze. Other comic highlights include Nick & Nora attending a rowdy wrestling match, and when their dog, Asta, triggers a massive barroom brawl.

Shadow of the Thin Man is yet-another witty blend of sophistication and farce. Even after four films, the Charleses haven’t worn out their welcome. Both the writers and stars keep finding ways to keep them endearing, despite neither character changing one whit. How often can you say that about a fourth film in any franchise?

SHORT:  “THE TELL-TALE HEART” - From 1941, this is one of the better adaptations of Poe’s classic short story.

MEE-OW! LIKE TAUNTING A MOUSE TO DEATH.
Posted by D.M. Anderson at 8:37 PM