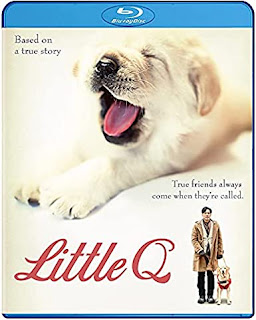 As the primary purveyor of this site, I sometimes review films that are difficult to watch, either due to their subject matter or because of imagery I’ll never be able to unsee. That being said, I found Little Q to be one of the more emotionally harrowing movies I’ve seen recently, because it just so happens that my own dog, Murphy, passed away a little over a week ago. Bad timing, I guess.

But the film isn’t about a dog’s death. It is about her life. In this case, a congenial pooch nicknamed Q, raised by a loving family and developing a special bond with their girl, Chan Zhiqiao. But this is only temporary while Q is being trained as a seeing eye dog. She’s later placed with Chan’s cantankerous uncle, Li (Simon Yam), a renowned chef who’s so angry over losing his sight that he takes it out on everyone who cares about him...including Q. In fact, his initial treatment of the dog is downright abusive.

But Q is nothing if not loyal and persistent. After an incident where Q saves him from a suicide attempt, Li slowly begins to appreciate the dog, eventually loving her. In the process, he becomes a better person. Most of the middle act is about this friendship over the years. Not only are the two inseparable, they depend on each other, as demonstrated when Li must leave Q behind to have a heart transplant. Even after returning to Chan - now a teenager - Q is obviously heartbroken, her health declining from old age.

However, Little Q is not-so-much a standard tearjerker as it is about a lifelong friendship and how a pet can change someone’s life. Though sometimes poignant, Little Q doesn’t wallow in sugary sentimentality. Q is a charming, good-natured dog, but simply doing her job as trained. Despite the initial scenes of abuse and a brief bit of conflict involving dog-nappers, the movie is outwardly uneventful...simply little moments which make up a life.And that’s what made the film tough for me to endure, as I think it will be for anyone who's just lost a pet they’re had for years. My own dog wasn’t especially well-trained. In fact, he was kind of an idiot. But like Q, he was around for so long that I took his presence for granted and never stopped to contemplate the inevitable day when he'd be gone. Little Q is a heart-warming, life-affirming film - and highly recommended for anyone who considers their fuzzy companions to be family - but watching it right now really made losing Murphy hit home.
KITTY CONSENSUS: