THE HOUSE NEXT DOOR: MEET THE BLACKS 2: Noisy Neighbors 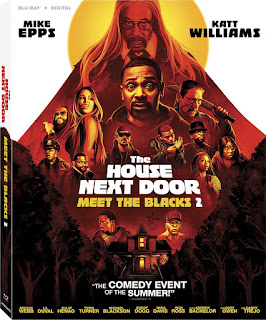 I’ll be upfront and admit I haven’t seen the original Meet the Blacks. But since this aggressively awful sequel features the same writer-director (Deon Taylor) bringing back most of that film's characters, I don’t think I missed much.

I laughed exactly one time. There’s a moment when Carl Black (Mike Epps) reports suspicious doings by new neighbor Dr. Mamuwalde (Katt Williams). Calling 9-1-1, he uses his ‘white’ voice. When the operator asks if the suspect is black, Carl says yes, at which time he’s assured five police units will be there within minutes. It's a perceptive and timely joke, which is unfortunately as clever as the movie gets.

The rest of The House Next Door is interminable and offensively stupid, wasting its talented cast with a non-stop barrage of screaming, f-bombs and the type of sex jokes that make 13-year-old boys high-five each other.

Whereas Meet the Blacks was a send-up of The Purge, this one appears to draw inspiration from Fright Night, with Carl moving his family back to the old neighborhood after falling on hard times (blowing all the royalties he earned from the book he wrote about surviving the events of the first film). His creepy new neighbor, Mamuwalde, turns out to be a vampire and a pimp (you know…’cause pimps are inherently funny) with designs on Carl’s wife, Lorena (Zulay Henao).

While that’s the nutshell plot, The House Next Door mostly consists of Carl playing straight-man to a slew of obnoxious characters who mostly exist to verbally abuse him or, if they’re women, parade around semi-nude. Speaking of the latter, every female character is served-up as a sex object, including Carl’s daughter Allie, who’s fawned-over by her own cousin (you know…’cause incest is inherently funny).

The entire cast certainly give their all, but the humor is embarrassingly juvenile. Loading the dialogue with expletives, misogyny and the n-word - mostly shouted at maximum volume - doesn’t make these stupidly-rendered characters or situations any funnier. However, it’s safe to assume that anyone who thought Meet the Blacks was hilarious will love The House Next Door. They’ll also be happy to learn it ends with the promise of another sequel. Everyone else can consider that a threat.

BLEH! LIKE COUGHING UP A HAIRBALL.
Posted by D.M. Anderson at 4:08 PM