PRINCE OF THE CITY is Worth Rediscovering 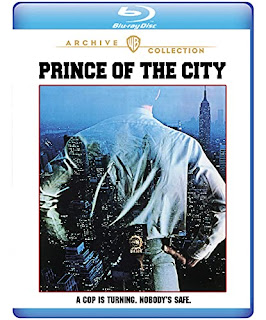 Man, get a load of that resume...12 Angry Men, Fail Safe, Serpico, Murder on the Orient Express, Dog Day Afternoon, Network, The Verdict...and those are just some of the highlights. Even if you aren’t familiar with his name, chances are you’ve seen at least a couple of Sidney Lumet’s films and never forgot them.

1981’s Prince of the City was one of the director’s less successful films. Part of that could be due to the obvious conceptual similarities to Serpico, but perhaps also because no one was really making movies like this anymore. Indeed, it’s a strong candidate for the most “70s” film not actually made in that decade. A shame, really, because even though it doesn’t rank among Lumet’s undisputed classics, it remains criminally underappreciated.

From a book by James Daley, Prince of the City is based on the true story of Robert Leuci, an undercover cop and key player in exposing wide-spread police corruption, as well as bringing down several mobsters that were in cahoots with. In the film, he’s depicted by Treat Williams as Daniel Ciello. But unlike Frank Serpico, Ciello himself is a corrupt cop who has a crisis of conscience. After considerable coercion, he agrees to assist district attorneys, gathering evidence by wearing a wire and recording his interactions with cops and criminals, all of whom have long-since learned to trust him.

Ciello’s only stipulation is that he will not rat-out his buddies, a close-knit group of cops known as ‘Princes of the City,’ who’ve had carte blanche to pretty-much do what they want without repercussions. Though the feds assure him that’ll never happen, implicating his friends eventually becomes unavoidable. It’s also increasingly obvious many of the officials he’s working with don't have his best interests in-mind, and some of them would like to see Ciello prosecuted as well (despite greatly benefiting from the evidence he repeatedly risked his life for).

I suppose some comparisons to Serpico are inevitable. However, Ciello is far less sympathetic. Though he occasionally expresses remorse over his past actions - like providing drugs for junkies in exchange for information - he’s no hero, nor does the film try to depict him as one. While Williams is no Pacino, he’s engaging enough in the lead to keep our interest. However, the best performance comes courtesy of Jerry Orbach in his pre-Law & Order days as corrupt pal Gus Levy. It’s always fun checking-out actors in roles prior to becoming household names.

The film is teaming with the ‘70s-style grit we typically associate with New York crime thrillers, though it’s considerably longer than necessary. It is occasionally meandering and takes too much time getting to the point. But the final hour, when the implications of Ciello’s actions finally come to bear, is truly harrowing. Prince of the City may lack the pacing and narrative flair of Sidney Lumet’s most lauded films, but it’s definitely worth rediscovering.

“PRINCE OF THE CITY: THE REAL STORY” - A very interesting look at the story that inspired the film, includes interviews with original author James Daley, as well as Robert Leuci, the former detective on whom Daniel Ciello is based.