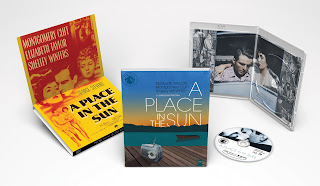 I’m gonna be forthcoming and admit I had never seen A Place in the Sun until now. Oh, I’ve heard of it, and am pretty certain my little sister was watching it one afternoon when I passed through the living room, but it was old and black & white...with kissing. No thanks.

Even after I began to discover and seek-out older films, I had little desire to scratch this one off my list. I never really understood Elizabeth Taylor’s appeal. Sure, she’s pretty and a decent enough actor, but I’ve never seen a film that was great because of her. Additionally, every ad, trailer and DVD cover touted A Place in the Sun as some kind of love story for the ages. With a few notable exceptions - like Casablanca - romantic films are one of my least favorite genres, most being just soapy melodrama.

But as I discovered, never judge a book by its cover. It turns out the film’s promotional campaign has always been phenomenally misleading. It has elements of a love story - particularly during the first act - but really, it’s about George Eastman (Montgomery Clift), an undereducated noob who gets a job working at his rich uncle’s bikini factory and immediately becomes twitterpated by Angela Vickers (Taylor), a beautiful young socialite. Instead, he settles for insecure factory girl Alice (Shelley Winters), who ends up pregnant with his child. Meanwhile Angela and George fall in love with each other.

So far, A Place in the Sun was mostly what I expected, though not half bad as these things go. Elizabeth Taylor is...well, Elizabeth Taylor, pretty to look at but not all that compelling. Clift and Winters are impressive, though, particularly the latter. But later, when Angela threatens to show up at the Vickers’ lake house as Angela and George are canoodling there one weekend, George decides he’s gonna kill her. Now we’re talking!

Being pretty dimwitted, he hasn’t really thought his plan through and police are pretty-much able to catch him before the weekend’s even over. George is an interesting character. While he earns our empathy at first, it’s slowly revealed what a terrible person he is, his life spinning wildly out of control by his own actions and lies. The narrative doesn't reveal if George actually murdered Alice or simply refused to save her from drowning. Either way, he displays no remorse over her death.

When you think about it, the second half of A Place in the Sun has more narrative and aesthetic similarities to film noir - one of my favorite genres - than romantic melodrama. Angela could even be seen as a femme fatale of sorts, albeit an unwitting one. After all, George did throw his life away for the sake of a woman. So after a slow start, A Place in the Sun turned out to be an entertainingly dark film about an irredeemable character, not at-all what I expected. I don’t know if it was director George Stevens’ intention, but watching a despicable lout’s life unravel around him - yet still sticking steadfast to his body of lies - was very gratifying.

As one of the studio’s most critically lauded films of the ‘50s, A Place in the Sun is a worthy addition to the Paramount Presents series. On Blu-ray for the first time, it’s been given a great video/audio facelift and supplemented by interesting archival bonus features (along with another new “Filmmaker Focus” featurette). And as usual for the series, the packaging is nice, featuring a combination of new & original artwork.

“FILMMAKER FOCUS” - Like many of the pre-1970 releases in the Paramount Presents series, Leonard Maltin gives a brief history.

“GEORGE STEVENS: THE FILMMAKERS WHO KNOW HIM” - Interviews with a plethora of equally legendary filmmakers; the best of the bonus features.

“GEORGE STEVENS AND HIS PLACE IN THE SUN”

AUDIO COMMENTARY - By George Stevens and screenwriter Ivan Moffat, who worked with Stevens on many films (though isn’t credited with A Place in the Sun).

TRAILERS - For A Place in the Sun, Shane and Sunset Boulevard.
KITTY CONSENSUS: