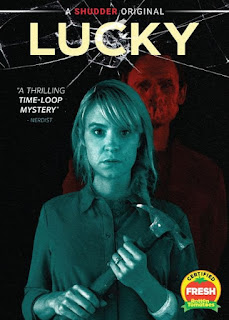 A truly oddball flick from the Shudder stable, Lucky is narratively convoluted and sometimes perplexingly ambiguous, especially at the conclusion. However, it’s also creepy, atmospheric and even morbidly funny on occasion. When it comes to horror, spoon-fed clarity is ultimately less important than how the movie makes you feel at the time. As such, this is a great little film.

May (Brea Grant, who also wrote the screenplay) is a frustrated self-help author living in a suburban home with laid-back husband Ted (Dhruv Uday Singh). When a masked intruder breaks into the house one night, May is terrified. Ted, however, isn’t remotely surprised, casually informing her the man breaks-in every night to try and kill them. After Ted makes quick use of a golf club to put him down, the intruder disappears.

May is stunned by her husband’s nonchalant attitude about the incident and cryptic explanation, while he doesn’t understand why she’s unaware of this nightly ritual. Their argument results in Ted leaving her alone in the house, not willing to return until she calms down. Sure enough, the man is back the next night. She takes him out herself, but the body disappears yet again. This happens every night. Each time she fatally wounds him, each time he disappears and each time the police arrive afterwards, but seem more concerned with the state of her marriage than catching the intruder.

This nightly encounter becomes something of a running gag, with May growing more irritated and angry than truly terrified...at least until the man attacks a few people close to her. In the meantime, she keeps imploring Ted to come home, but he won’t return her calls. Even his family is reluctant to help her out, though her sister-in-law empathizes with her, and in one subtly revealing moment, we learn why. It turns out May isn’t the only woman being attacked every night by a masked stranger. That, coupled with everyone's overall indifference to May's plight, suggests some social commentary is intended (which viewers may or may-not pick up on).

It’s an intriguing scenario and effectively executed, with director Natasha Kermani providing a lot of quirky, semi-surreal touches that not-only accentuate the narrative and possible themes, they provide some of the film’s more amusing moments. But ultimately, the film is a puzzle that nobody involved has any intention of completing, nor are all the pieces provided for the viewer to do it themselves. Those expecting every clue and story thread to be neatly tied together with a pretty bow will find the film extraordinarily frustrating.

But those who appreciate the journey more than the destination will certainly love the sinister tone, dark humor and genuinely menacing antagonist. Despite its ambiguities, Lucky is constantly engaging, anchored by a strong, assertive female character - well-played by Grant - who’s never presented as helpless or dependent.

BEHIND THE SCENES PHOTO GALLERY