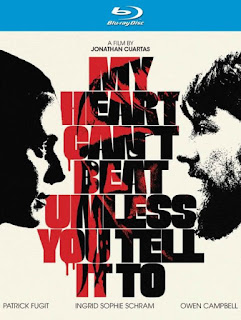 In the prologue, Dwight (Patrick Fugit) offers to take a vagrant to a nearby shelter. But it’s actually Dwight’s house and when they arrive, he bludgeons the man before taking him inside. He and his sister, Jessie (Ingrid Sophie Schram), drain the blood from the body, then feed a bowl of it to the sickly little brother, Thomas (Owen Campbell).

My Heart Can’t Beat Unless You Tell It To is about the relationship between these three. Though it’s never stated directly, Thomas is obviously a vampire. But while blood keeps him alive, he remains sick and bedridden much of the time, unable to leave the house (though he eventually wants to). It also appears that Dwight and Jessie have spent most of their lives taking care of him.

But Thomas is not getting any better and Dwight has grown weary of providing fresh victims. As his relationship with a local prostitute demonstrates, he desperately wants to escape this family burden. Jessie, however, appears to call all the shots and quashes any notion of Thomas ever leaving or Dwight moving on with his life.

Very deliberately paced, the film is less about shocks and scares than depicting Dwight’s hopelessness. As such, he earns our sympathy, despite the terrible things he’s done, and when focusing on his personal conflict, the film is pretty engaging. However, the obvious effort to keep things low-key and somber - right down to the performances - eventually works against it. Despite tossing in a few gruesome scenes here and there, it seldom plays like a horror film. Still, it’s well-directed for a low budget film, punctuated by decent performances, especially Fugit, all grown up from his Almost Famous days. With no peaks, valleys or narrative tricks up its sleeve, ths one depends almost entirely on the premise to maintain interest. Some will undoubtedly appreciate the film’s unique spin on the vampire subgenre, while fans of traditional bloodsuckers might find their patience tested.