THE FATAL RAID: Why Proofreading is Your Friend 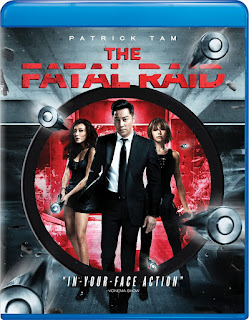 Review by Tiger the Terrible😿

Take my advice, kids...proofreading is your friend.

When it comes to foreign films, I usually recommend watching them in their original language, but in the case of The Fatal Raid, I’ll make an exception.

The movie itself is a violent Hong Kong action film that begins with a prologue in which a group of close-knit detectives end up in a gunfight with gangsters, resulting in many deaths, including some civilians. 20 years later, two of the survivors have a new crew consisting of young, hot female cops, handy with both guns and fists. Together, they not-only confront a gang of punks trying to make a name for themselves, but a member of the old crew who somehow survived his gunshot wound to the head. He now has a massive chip on his shoulder, though it isn't made clear why.

The Fatal Raid wears its aspirations on its sleeve, with stylized violence, over-the-top fights scenes and some blatantly goofy caricatures, such as the nerdy male cop who’s cartoonishly smitten by one of his sexy young fellow officers. Speaking of which, just before the final act, these young hotties prepare for battle with a slow-motion striptease, swapping-out their civies for tight leather skirts and thigh-high boots. One gets the impression this sequence is one of the main reasons the movie exists, which is fine. As a throwback to the outlandish aesthetics of many ‘90s-era Hong Kong action flicks, I suppose you need scenes like this. In that respect, the movie kinda works.

However, the biggest problem with The Fatal Raid - and it's a doozy - has little to do with the movie itself. Any chance of narrative clarity is utterly destroyed by the subtitles. Not-only do they flash across the screen too fast, they are often nonsensical, and we’re not talking occasional translation errors or a misspelled word here and there. More often than not, the subtitles border on the type of gibberish a seventh grader might crank-out after putting-off a 500 word essay until the day it's due.

Does it affect our understanding of the plot? Absolutely. There are several sequences where we don’t know what the hell is going on because nobody bothered to proofread. It’s supremely confusing and I eventually gave up trying to make sense of it and simply watched the mayhem. This disc features an English language version, and while I personally find dubbed films a major distraction, I must grudgingly recommend watching that version (though it still keeps the viewer from being totally engaged).

There might be a good movie lurking around in there somewhere - or at least a shamelessly entertaining one - but everyone’s hard work on The Fatal Raid is so severely undone for English speaking audiences that it's difficult to tell. While the action is still interesting to look at, the atrocious subtitles seriously diminish the context needed for any of it to really mean anything.

MEH. LIKE SHARING THE BED WITH THE DOG.
Posted by D.M. Anderson at 8:51 PM