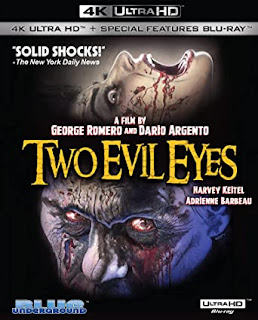 Not a collaboration in the purest sense, Two Evil Eyes features a pair of horror legends having a go at Edgar Allen Poe, each applying their distinctly different styles to a classic tale. Though it doesn’t rank among either director’s best work, this comparatively obscure, somewhat underappreciated film is certainly worth revisiting. One thing is certain...with this 4K upgrade, it’s never looked or sounded better.

George A. Romero directs “The Facts in the Case of Mr. Valdemar,” one of Poe’s lesser known stories. Unscrupulous trophy wife Jessica (Adrienne Barbeau) and her even more unscrupulous boyfriend, Robert (Ramy Zada), use hypnosis to bilk her terminally ill husband, Ernest (Bingo O’Malley), out of his fortune. However, he dies prematurely, so they stash him in a freezer, hoping to preserve him long enough for all the legal formalities to be completed before announcing his demise. Unfortunately for them, Ernest ain’t quite as dead as they hoped. Since he died in a hypnotic state, he’s trapped in limbo between the living and the dead, along with “others” who use him as a vessel for escape.

After a slow start, the interest level rises once the story takes directions that are more within Romero’s comfort zone...efforts to stash the body and Ernest’s disembodied torment of Jessica are reminiscent of Creepshow or a Tales from the Darkside episode, while the climax puts George squarely back in zombie land, albeit with supernatural overtones. The segment feels a little padded at times and the depiction of the “others” is laughable, but overall, it’s a satisfying tale of comeuppance punctuated by impressive make-up FX by Tom Savini.Dario Argento puts an interesting modern spin on one of Poe's most famous stories, “The Black Cat.” Harvey Keitel plays Rod Usher, an alcoholic crime scene photographer tormented by the titular creature, brought home by live-in girlfriend Annabel (Madeleine Potter). As his drinking and temper grow worse, he kills the cat - more than once - and eventually Annabel. Rod tries to cover his tracks by sealing the body within the walls of his house and reassuring nosy neighbors she’s out of town, but the cat isn’t quite done with him.

Despite many character and situational changes, Argento retains the essence and psychological horror aspects of Poe’s story. He also throws in references to other Poe works, such as “The Pit and the Pendulum” and “Berenice.” Even some characters' names allude to certain stories and poems. Being Argento, there's a big emphasis on visual aesthetics, some of which reflect his giallo origins. This one’s also more gruesome than Romero’s half, though the questionable special effects related to the cat diffuse the tension at key moments.

Two Evil Eyes was originally conceived to feature four stories by different directors, including John Carpenter (and allegedly Wes Craven). Talk about your dream teams! Still, the two we did get are pretty good, each featuring Romero and Argento’s unique stylistic approaches.

This set features a 4K restoration, pretty much the sole reason for anyone considering an upgrade. I haven’t seen previous releases to draw any comparisons, but the picture and sound quality are outstanding. An additional Blu-ray disc contains a majority of the bonus features, consisting primarily of interviews carried over from Blue Underground’s 2019 release. There’s a lot of great stuff here, but I am sort of disappointed that a CD of Pino Donaggio’s soundtrack isn’t included this time around. No illustrated booklet, either.