THE NEW DEAL FOR ARTISTS: Why We Can't Have Nice Things 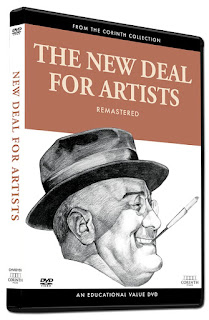 I had no idea this was even a thing. But as writer Studs Terkel says right at the beginning of this film, neither did most people. However, I'm not at-all surprised by who ultimately spoiled the party.

Part of Franklin Delano Roosevelt’s “New Deal” plan was the founding of WPA, which provided funding and jobs for writers, performers, artists and photographers. That way they could continue making a living through their chosen craft. Photographers and writers were commissioned to document the devastating effects of the depression, while a variety of artists developed their own unique styles through various projects. More controversially, authors and playwrights created incendiary works which raised the hackles of conservative right-wingers.

Speaking of which, not-only was the New Deal politically divisive, the WPA, in particular, was singled-out by opportunistic Republicans as not-only a waste of resources, but a threat to democracy. Years before Joseph McCarthy reared his ugly head, the communist witch hunt began in earnest. Artists made good scapegoats for ambitious conservative politicians with self-serving agendas. This film confirms my suspicion that the GOP have always been the reason we can't have nice things.

But more importantly, The New Deal for Artists showcases the life, work and talent of people the average viewer has probably never heard of (though a few familiar faces are interviewed, as well, including John Houseman and Norman Lloyd). A lot of these artists were still alive at the time of this film’s production, so we get first-hand accounts of their experiences. As such, their insights and anecdotes are fascinating.

Ultimately, most viewers will walk away feeling enlightened, if not a bit angry. A lot of important works of American art were created - and lost - during this period. But fortunately, this film hasn't been lost. Narrated by Orson Welles (who was one of these people), The New Deal for Artists is an interesting document of the effort to foster creativity during a tumultuous period...and the asshats who just couldn't stand it.

SUPPLEMENTAL BOOKLET - Includes two essays and brief bios of some of the interviewees.