HARRY POTTER AND THE SORCERER'S STONE: MAGICAL MOVIE MODE: For the Serious Potterphile 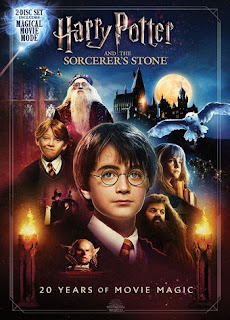 If you’re gonna re-release a classic movie on home video for the umpteenth time, this is the way to do it.

Harry Potter and the Sorcerer’s Stone is 20 years old. The kids who turned the books and subsequent movies into a cultural phenomenon are now in their thirties. Most of them are undoubtedly passing their love of the franchise on to their own children. Since the film has been re-released countless times over the years in various formats, either as a stand-alone film or boxed with the others, chances are anyone reading this already has it laying around the house somewhere.

But Warner Bros has tried something a bit different for the film’s 20th Anniversary. Rather than ballyhooing a remastered version, dressing it up with pretty new packaging or throwing in some superficial new supplemental material, they’re offering-up Harry Potter and the Sorcerer’s Stone in what they’re calling “ Magical Movie Mode.”

Not quite interactive, disc one presents an extended version of the film in its entirety, enhanced with various bells & whistles as it plays. Director Chris Columbus chimes in now and again, appearing in the lower right corner of the screen to discuss various scenes, how they were accomplished and/or his own personal feelings about them...sort of like an audio commentary. Elsewhere, objects, characters and locations are described and/or defined through pop-up text, offering their functions and history within the Potterverse. I’ve seen a similar feature accompanying other films before - most notably the Star Trek movie franchise - and it’s a fun way to watch something you alreadly know by heart.

There is also a trivia game where multiple choice questions appear throughout the film. You don’t use the remote to select and are expected to keep score yourself. As someone who’s not really a Potter guy, I got a big fat zero, but I can imagine this would be a ton of fun with a bunch of die-hards in the room. ‘Magic You Might Have Missed’ points-out tiny background details in certain scenes. Finally, whenever a boot pops up, casting a blue border around the frame, we’re seeing an extended or previously-deleted scene.

Magical Movie Mode or sort of like viewing the movie and bonus features all at once, certainly not the worst way to revisit a film you’ve seen a thousand times. This new version is definitely aimed at those who’ve long-since dog-eared their books and scrutinized every frame of the films. With this version, they might even learn a thing or two they didn’t know before.