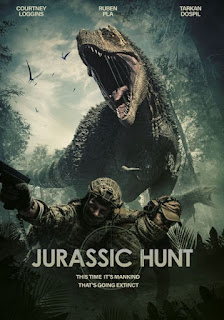 Let’s just agree most movies with ‘Jurassic’ in the title that didn’t inspire a theme park ride are predictably cheap garbage, destined to be a ‘Weekly Wow’ at Dollar Tree or dwell in the lower bowels of your Amazon Prime menu. Some of ‘em are good for a few shits n’ giggles, but many try way too hard to top Sharknado’s calculated ridiculousness.

Which makes Jurassic Hunt sort of an anomaly. Sure, the CGI is on par with a computer nerd’s class project. And yeah, I suppose it could end up as an impulse buy in your Dollar Tree basket (perhaps even before the year is out). The whole thing looks cheap and hastily slapped together, with chuckleworthy lapses in logic and continuity.

But despite all that - and I can’t believe I’m saying this - Jurassic Hunt is actually pretty entertaining, and not always at its own expense. While no one will ever mistake it for a great film - or even a good one - it’s sometimes genuinely funny without resorting to the heavy-handed self-awareness the Sharknado series ran into the ground.

And believe it or not, the basic premise isn’t terrible, featuring a group of thrillseekers who pay for the privilege of hunting dinosaurs on a preserve, only to be picked-off one-by-one in a variety of amusing ways. The lone woman in the group, Parker (Courtney Loggins), is actually an undercover activist trying to gather evidence to expose what’s going on, while the ruthless tycoon overseeing the preserve, Lindon (Joston Theney), takes extreme measures to make sure she doesn’t leave alive. No explanation is given for how the dinosaurs exist because...well, who cares? All that matters is we’re rooting for them from the get-go, wonky looking as they may be.

But we can’t completely write-off the characters and performances, especially the supporting cast of testosterone-heavy dino-fodder. My favorite would have to be Blackhawk (Antuone Torbert), a badass pirate/mercenary/terrorist whose monologue about the power he feels from killing is unceremoniously cut-short by a pesky pterodactyl. Another hunter’s stand-off against a stampeding T-Rex might be one of the funniest visual gags I’ve seen all year. And let’s not forget the guy who strikes up a conversation with a fellow hunter by asking if he’s ever wanted to do more to a dinosaur than kill it. Now that I think about it, with a (much) bigger budget and real talent behind the camera, this could have had the potential to be more entertaining than Jurassic Park III. Instead, Jurassic Hunt is slipshod slop. However, if you're in the right frame of mind, you might find yourself laughing with it as often as you laugh at it.
KITTY CONSENSUS: