RAGING FIRE: A Fistful of Yen (and Then Some) 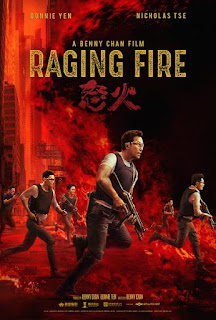 Review by Tiger the Terrible😻

Besides the intensity of the action, the title could also apply to both its main protagonist, Inspector Bong (Yen), a dedicated, upstanding detective, and antagonist, Ngo (Nicholas Tse), who leads a gang of ruthless high-tech robbers. During a police raid to thwart a major drug deal, Ngo’s crew shows up, kills both parties in the exchange and makes-off with $40 million in crystal meth. They also kill several cops, including Bong’s longtime friend and mentor.

But Ngo is no ordinary criminal. He and his entire crew were once promising cops under Bong’s tutelage, but ended up being convicted for the wrongful death of a suspect during a kidnapping, largely due to Bong’s testimony. While Bong simply stated what he witnessed, Ngo and his partners were actually acting on the orders of their superiors.

Ngo appears just as motivated by revenge - on Bong and the higher-ups who railroaded them - as personal gain. This makes him an intriguing villain...violent, maybe even a little crazy, but not entirely unsympathetic. The relationship between Ngo and Bong is thoroughly explored, resulting in a dynamic game of cat & mouse where both men are equally methodical and intelligent, often anticipating each other’s moves. Additionally, Bong is the most engaging character Yen’s had the opportunity to play since his Ip Man days, delivering a strong performance to go along with his legendary physical abilities.

Speaking of which, Raging Fire not-only features great characters and a complex plot - though not difficult to follow - it’s loaded with kinetic, violent mayhem. Yen engages in a few extended fight scenes, including a showstopper in an abandoned church. But these sequences, directed by Yen himself, aren’t simply well-choreographed; they’re convincing. These guys really look like they’re beating the shit out of each other. Following a destructive car chase - the only time some wonky CGI is noticeable - there's a massive Heat-style gun battle in the streets, resulting in collateral damage most similar action films pretend doesn’t happen.

Almost epic in scope, Raging Fire may not always be believable, but it’s a constantly entertaining crime thriller with a great story. Doing the preliminary legwork to fully flesh-out its characters - on both sides of the badge - certainly pays off, since we’re far more invested in them when the bullets begin to fly. Donnie Yen has seldom been better, digging into a role that showcases both his physical and dramatic skills. This is, so far, the best action movie of the year.

On a more somber note, Raging Fire is also the last film directed by the late, great Benny Chan. The film is dedicated to him.
KITTY CONSENSUS:

MEE-OW! LIKE TAUNTING A MOUSE TO DEATH.
Posted by D.M. Anderson at 8:43 PM