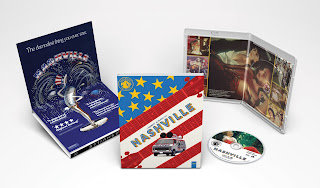 When I was a kid, my friends and I often hung-out at the Southgate Quad Cinema on weekends, where we’d spend the afternoon sneaking from one theater to another, catching as many movies as we could.

Robert Altman’s Nashville was playing there one weekend, re-released to capitalize on the multiple Oscar nominations it had just received, including Best Picture. Even as a 12-year-old, the Oscars were kind of a big deal (though I was still incredulous that The Towering Inferno lost to The Godfather, Part II the previous year...what the hell was the Academy thinking???).

Since this was likely my only opportunity to catch another nominated picture besides Jaws, I decided to check it out, dragging my buddy Greg along for the ride.

And...WTF? Who’s the main character? Who’s the bad guy? What does this chopper guy have to do with anything? Why is everyone talking over each other? What’s the point of that scene? Or that one? What the hell is going on??? None of it made any sense...just scene after scene of meaningless conversations and some of the worst music I ever heard. Greg and I gave up after about an hour, sneaking into auditorium #3 to catch At the Earth’s Core again (at least that one had exploding dinosaurs and Caroline Munro). I couldn’t believe anyone thought Nashville was Oscar worthy.

On awards night, Nashville took home one trophy for the song “I’m Easy,” which apparently appeared in the part of the film we skipped out on. Co-star Keith Carradine, who actually wrote it, performed the song on the show. Ugh...what a corny little tune. Though equally incredulous that Jaws lost Best Picture to One Flew Over the Cuckoo’s Nest (I still am!), at least Nashville didn’t win anything else. With the inherent wisdom that comes with seventh grade, I thought it was long, slow, boring and plotless.

I was completely wrong, of course, though a lot of folks who never developed an appreciation for Robert Altman’s quirky, unconventional sensibilities will say I wasn’t. I grew to really like a lot of his films over the years...MASH, Kansas City, Gosford Park (hell, even Quintet), but certainly understand why his work has always been so divisive.

Believe it or not, the first time I ever sat to watch Nashville in its entirety was for this review, and I must finally concur that it is a wonderful film...engaging, funny, satirical, heartbreaking and perceptive, sometimes all at once. And for a 46-year-old movie, the political aspects of the story remain surprising timely.

One of Altman’s strengths has always been how well he directs ensemble casts, but never as effectively as he does here, juggling 24 major characters with the skill of a conductor. They are all essential to the narrative, and all of their stories are interesting, whether they cross-over with others or not. What I once mistook for incomprehensible dialogue, chaotic jabbering and poor performances are actually authentic slices of reality (though God help whoever was tasked to provide subtitles for this disc). I even found myself appreciating the overall lack of closure to most of the plot threads. Isn’t that how real life works most of the time?

Heard within the context of the story, even Carradine’s sappy, Oscar-winning little love ditty is savagely ironic. His character, Tom, is a heartless womanizer, and while performing the song in a small club, all four women he sleeps with during the course of the film are in the audience. As he wistfully croons with faux-sincerity, each believes the song is about them. Not-only does the moment render Tom the primary antagonist up to this point - even surprising his bandmates on-stage with the announcement he’s going solo - it says a lot about the nature of celebrity, as well as the facade most of these performers live behind. It’s just one compelling scene in a film that’s rife with them.

So after changing my tune about Nashville, is it better than Jaws? Hell, no. There’s still room for improvement, like having Tom, Del (Ned Beatty) or Haven Hamilton (Henry Gibson) meet their demise in the mouth of a Great White. Still, it was equally deserving of an Oscar nod. I just never knew it until now. Better late than never, I guess.

Nashville has been released on Blu-ray before, most notably by Criterion Collection, which had considerably more bonus features. But not-only was that disc expensive, it’s now out of print, so good luck finding it. Besides, this version (#24 in the Paramount Presents series) features a terrific video and audio transfer, as well as cheaper price tag. The quintessential Robert Altman film, this one is a must-own.

“24 TRACKS” - 15 minute featurette combining a vintage interview with Robert Altman and a new one with his son, Stephen, who worked on-set as a teenager.

TRAILERS - For Nashville, Popeye (the low point in Altman’s career, if you ask me) and Urban Cowboy.
KITTY CONSENSUS:

MEE-OW! LIKE BEING TURNED LOOSE IN A BIRD SANCTUARY.
Posted by D.M. Anderson at 3:08 PM