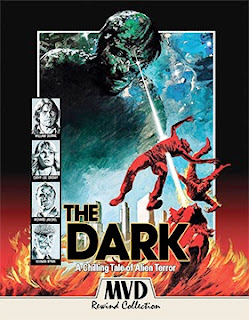 In my neck of the woods back in the mid-to-late ‘70s, the Rose Moyer Theatre opened up with great fanfare. This was the first in Portland to boast six auditoriums, two big ones for the blockbusters, two mid-sized ones for those second-tier movies and two rinky-dinks. With that many theaters, it seemed like every movie came and went through the Rose Moyer at one time or another, some for just a week, others for over a year.

One of those rinky-dinks, auditorium #6, was almost always reserved for B-movies and exploitation films. #6 was tucked-away like a dirty secret at the back of the building near the restrooms (we could even hear the toilets flushing through the theater wall).

Perhaps reflective of my tastes in cinematic entertainment at the time, I ended up seeing a lot of forgotten flicks in #6, such as Laserblast, The Crater Lake Monster, Eyeball, Humanoids from the Deep and just about everything spat-out by Film Ventures International, known for creating budget-conscious knock-offs of bigger & better films. Though it was not particularly close to my house, I was often able to talk Mom or Dad into dropping me off for a variety of sleazoid spectacles, and due to the theater’s general indifference to checking IDs, I was allowed to check out a lot of R-rated wonders before I was even able to drive.

One such fabulous folly was The Dark, which has sort of an interesting history that director John ‘Bud’ Cardos discusses at-length in one of this discs bonus features. In a nutshell, the film was originally going to be about a serial killer and directed by Tobe Hooper. After Alien came along, Film Ventures decided that this monstrous giant lurking the night streets of LA should be from outer space. When he wasn’t ripping people’s heads off, he’d zap them into oblivion with his laser eyes. But seeing it today with the wisdom that comes with age, it's obvious the decision to turn The Dark into a sci-fi film was made during production.

Of course, I didn’t know any of this at the time, and if not for the tacked-on opening crawl and hastily-assembled climax (with gloriously awful special effects & goofy pyrotechnics), we’d naturally assume the creature is just Eegah-in-pants. However, an alien in pants is even funnier, as are his growls and grunts while slaughtering his victims (he even sounds like Eegah). And if that isn’t enough, how ‘bout the frequent appearance of a derelict blind man who happens to be shuffling around near every death scene, with no explanation of his purpose to the narrative.

Still, the performances are actually pretty good, with a decent cast. Well, a decent cast and Cathy Lee Crosby (though she looked good enough to earn poster space on my bedroom wall). There’s William Devane as an ex-con-turned-author, who I recently enjoyed in Rolling Thunder at the same theater. Then there’s the great Kennan Wynn, fresh from playing a colonel in Laserblast, another chuckle fest I caught in auditorium #6, though I most fondly remembered him being snuffed by Charles Bronson in The Mechanic. Let’s not forget Film Ventures’ go-to guy, Richard Jaeckel, back from the dead after suffering a couple o’ critter kills in Grizzly and Day of the Animals. Yeah, I know there are more respectable films on their resumes, but when you’re 14, you don’t really give a damn about The Missiles of October.

By the way...look fast for none other than Philip Michael Thomas, whose character is listed in the credits as ‘Corn Rows.’ He was still a nobody back then, but would later epitomize cool along with Don Johnson on Miami Vice for a brief time before becoming a nobody again. And hey...isn’t that Casey Kasem counting down America’s top 40 autopsy results as a local pathologist?

Even in ‘79, The Dark was supremely silly (though the promotional artwork, included with this disc, was awesome). Still, I had a good time, mostly at the film’s expense. Seeing it again for the first time in over four decades brings back a lot of fond memories...of the movie, the era and the Rose Moyer itself, which has long-since been demolished. A massive Regal Cinema now stands in its place.

Part of the MVD Rewind Collection, The Dark has been given a nifty Blu-ray facelift. Both the video and audio specs make it look brand new, so we can appreciate Devane’s hip bachelor pad and swingin’ robe in all their gold & silver glory. Two excellent interviews are also included, along with an interesting audio commentary made when director John ‘Bud’ Cardos was still alive. One admittedly great aspect of the film is the creepy score by Roger Kellaway, and there’s an option to play the film with just the music. All told, the movie and its accompanying goodies are a charmingly cheesy trip down memory lane.

INTERVIEW WITH ROGER KELLAWAY - A new interview with the film’s composer, who did quite a few low budget horror scores back in the day. He discusses this film at-length, as well as a few other notable ones.

INTERVIEW WITH JOHN ‘BUD’ CARDOS - Vintage interview with the director. In addition to talking about his entire career, Cardos discusses how The Dark went from being about a serial killer to a laser-eyed alien.

REVERSIBLE ARTWORK - The reverse side actually features a landscape version of the original poster.