IN THE HEIGHTS and the Missed Opportunity 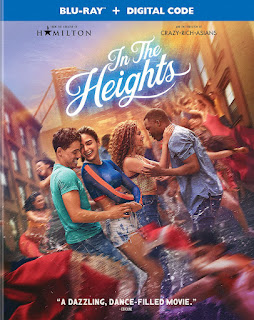 Review by Stinky the Destroyer😹

If I were a betting man, I’d have lost the farm on this one.

At the very least, I'd have wagered that In the Heights was destined to be a sleeper hit on par with The Greatest Showman. Being released just as the country was starting to open up again was almost perfect timing. What better way to celebrate the end of our pandemic-imposed exile - and enduring a barrage of current events which made us question our faith in humanity - than taking in a grand piece of escapism that promises nothing but a spectacular good time? Hey, it worked for Godzilla vs. Kong.

In fact, it was while attending Godzilla vs. Kong that I first caught the trailer for In the Heights. The damn thing gave me goosebumps, and I don’t even like musicals all that much.

That it arrived with a comparative whimper - despite stellar reviews - is still mind-blowing. Then again, I didn’t see it in a theater, either, so I’m partly to blame. But after finally watching the film for this review, I sure wish I had. If not one of the best movies of the year, In the Heights is certainly one of the most entertaining. From a purely aesthetic standpoint, there is so much going on in nearly every frame that a small screen doesn’t really do it justice. A missed opportunity, to be sure.

But even on my comparatively puny 50-inch set-up, In the Heights is constant eye & ear candy. From the showstopping opening number - introducing most of the major characters - to the heartfelt resolution, the film weaves dozens of insanely catchy tunes into the narrative that not-only drive the plot forward, they provide much of the character exposition. Many of the songs are accompanied by impressive choreography, sometimes featuring one or two actors, others where it seems like half of Washington Heights - the film’s setting - has shown up for the party. One sequence in particular - a gravity-defying dance up the side of a building - is visual highlight that probably wasn’t part of the original Broadway show.

Primarily narrated by the main protagonist, Navi (Anthony Ramos), the story juggles several concurrent storylines, most involving characters’ dreams of escaping the neighborhood that their Dominican Republic ancestors have called home for generations. Navi himself wants to return to DR to reopen his late father’s dilapidated business, while the girl he’s sweet on, Vanessa (Melissa Barrera), aspires to be a fashion designer with a swanky apartment. Navi’s young cousin, Sonny (Gregory Diaz IV), wishes to someday attend college, which is threatened by his immigration status. Not everyone wants to leave, though. On summer break from Stanford, Nina (Leslie Grace) feels like an outsider in college and misses the people of her own culture. This upsets her father (Jimmy Smits), who sold off most of business to keep her enrolled. At the center of everything is Abuela (Olda Merediz), the de-facto matriarch of the entire neighborhood, though she never had children of her own. While technically a secondary character, in many ways she’s the heart of the film, both narratively and thematically.

In the Heights is filled with a wide variety of other colorful characters whose stories may not get as much screen time, but are just as engaging and wonderfully realized by a terrific ensemble cast. Even running a potentially butt-numbing 143 minutes, there are almost no throwaway moments. Nearly every scene, whether presented in song, dance or dialogue, is an important component to the narrative. There’s even some relevant - and poignant - social commentary to be found, though it never drags the viewer down with heavy-handed sermonizing. And make sure to stay through the closing credits for the film's biggest laugh.

It looks like most of us missed out on seeing In the Heights as it was meant to be experienced, but here’s hoping it finds the audience it never enjoyed in theaters. Even from the comfort of our living rooms, modern movie musicals don’t get much more entertaining than this. Energetic, funny, sometimes wonderfully bittersweet and occasionally jaw-dropping, it’s a film with many highs and very few lows. But for God’s sake, don’t watch it on a tablet!

MUSICAL NUMBERS - This option lets you go to any musical number in the film.

MEE-OW! LIKE BEING TURNED LOOSE IN A BIRD SANCTUARY.
Posted by D.M. Anderson at 9:05 PM