OCCUPATION and the Road More Traveled 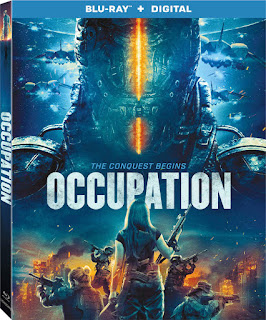 AVAILABLE ON BLU-RAY FROM
LIONSGATE

Stop me if you've heard this one...

Aliens arrive on Earth in massive ships around the world to annihilate our cities and enslave humankind. In the aftermath, several survivors begin to fight back, leading a growing rebellion to free their loved ones and take-back the planet...or die trying-

The deja vu you're sensing right now is valid. Hailing from Australia, Occupation travels a familiar road taken by countless other sci-fi movies and TV shows. That all of the action takes place in and around a small farm town suggests writer/director Luke Sparke didn't quite have the same resources at his disposal as Roland Emmerich, but we won't hold that against him. If an advanced species capable of interstellar travel wants to kick-off their invasion by attacking a rugby match in the middle of nowhere, who are we to question their motives?

Still, a little spark of imagination would've been nice. Originality doesn't cost $100 million. Occupation isn't badly made or anything. For budget-conscious sci-fi, it's pretty well constructed. As a checklist of familiar tropes, it covers all the bases...the ominous arrival, the unprovoked attack, survivors who go from zero-to-freedom-fighters in a single montage, adversaries who put their petty differences aside, almond-eyed aliens, pew-pew-pew laser battles, more lens-flares than a hundred J.J. Abrams films and an overwrought music score that makes every scene play like President Whitmore's Independence Day speech. And at the end, we are reminded that the fight has just begun.

An optimistic denouement, to be sure, but despite offering absolutely nothing new to an already overcrowded subgenre, Occupation remains fairly watchable. It's the kind of film that's sort-of fun in the moment, neither great nor terrible, with proficiently-shot action, adequate special effects and decent performances. None of it will linger in the memory for too long afterwards, like that mildly-amusing joke you once heard, but forgot about until somebody else starts to tell it.