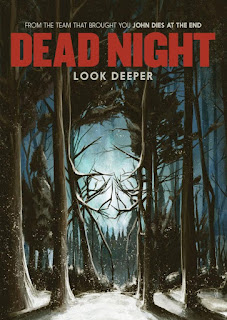 There's really nothing in Dead Night that a dedicated horror fan hasn't seen before, which shouldn't come as a surprise. Originality is pretty damned rare in horror these days. It might even be frowned upon in certain circles; sometimes seeing how a new movie treads familiar ground can be enjoyable.

A feeling of deja vu is definitely present throughout this one, which has a family venturing to a remote cabin in the snowy woods. And of course, there's something out there. This time, that 'something' is a band of grungy, monster-clawed nasties with supernatural abilities, but also able to ram a tree limb through your skull should the need arise. The story never makes-clear exactly what they are - it's suggested they are witches - or their purpose, but I suppose it ultimately doesn't matter.

The plot is murky at-best and makes the near-fatal mistake of inserting footage of a fake true-crime documentary about the incident, so we already know who lives, who dies and who killed them before the halfway mark. All that's left is seeing how everything plays out, but few of the narrative turns will come as real surprises. Conceptually, much of it is reminiscent of The Evil Dead, though more serious in tone.

Still, Dead Night is well-paced, atmospheric - making the most of its snowbound setting - and features a few impressively nasty deaths. The practical make-up and gore effects are convincing and suitably graphic, with an elaborate 'transformation' scene that's one of the visual highlights. The performances are mostly adequate, though Casey Pollack has standout moments as the family's vengeful matriarch. And of course, it's always great to see legendary scream-queen Barbara Crampton, who engages is some amusing scenery chewing as the primary villain (and looking pretty damn good for a woman pushing 60).

So while there may indeed be nothing new under the sun (or in this case, the moon), Dead Night is enjoyable enough to warrant a watch or two. You've seen it all before, but what it lacks in freshness it makes up for with technical skill and creative carnage.