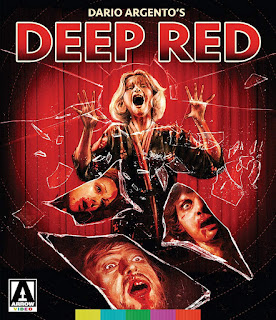 Revisiting Deep Red for the first time in...Jesus, 30 years...I've come to the realization that Suspiria may not be Dario Argento's best film after all.

I didn't always think that way. When first I brought it home from my local Mom & Pop video store, I thought it totally sucked...bad dubbing, choppy editing and little of the stylized bloodshed that made Suspiria such weird-ass fun. It played more like a Lucio Fulci film and I considered rage-quitting every ten minutes or so.

Though I didn't know it at the time, what I saw was the truncated, full-screen, English version on VHS, with over twenty minutes shaved from its original length. It meant, of course, that I hadn't really seen Deep Red at all.

This new Blu-ray from Arrow presents Profondo Rosso the way it should be seen, in glorious widescreen with a 4K restoration and the original Italian audio track. For me, watching it was revelatory. This might be the most visually interesting and aesthetically gorgeous horror movie I've ever seen. Even the masterful murder sequences achieve a level of artistry - and savage beauty - Argento only hinted at in The Bird with the Crystal Plumage.

One time I purchased a compilation CD by Goblin (the band who scored several Argento films), mainly because it contained the hypnotic title tracks from Dawn of the Dead and Suspiria. Heard out of context, most of the other music sounded like discarded ELP outtakes. But this disc's audio renders the Profondo Rosso tracks absolutely chilling, the perfect soundtrack for murder. And if the ominous title tune doesn't raise a few goosebumps during the opening credits, you're obviously not in the mood for a horror film right now.

And who knew the movie was actually funny? Besides some of the violence, much of what was cut from the English release were scenes of the relationship between the two main characters, pianist Marc Daly (David Hemmings) and reporter Gianna Brezzi (Daria Nicolodi), as they try to find out who's behind a series of brutal murders. Their interplay is often humorous and charming, offering a nice contrast to the more intense sequences. In fact, it's this attention to character detail that renders the film more narratively compelling than Suspiria or Inferno.

But Profondo Russo is still primarily a masterful exercise in style over substance (or logic). It remains the quintessential Giallo film, which justifiably established Dario Argento as one of horror's great visual geniuses. Though it's been released on Blu-ray before, this one boasts one great new bonus feature (outlined below) fans will want to check out. And if Profondo Russo is new to you - or you were perhaps once duped into renting Deep Red - you just gotta see this.

MEE-OW! LIKE TAUNTING A MOUSE TO DEATH
Posted by D.M. Anderson at 5:45 PM