The Cold Perfection of THE DAY OF THE JACKAL 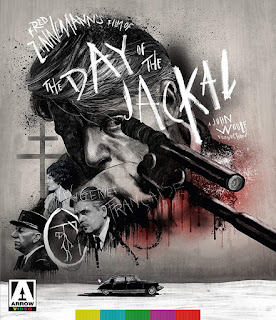 The Day of the Jackal is another one of those "perfect" films.

There's been scores of great films, of course, and perfect ones are usually great by default (though not always). For me, the greatest of all time has always been Jaws, but grudgingly acknowledge it ain't perfect.

A perfect film, though? A perfect film is technically, conceptually & creatively flawless. No throwaway scenes, redundant characters or questionable casting decisions. The direction, performances, pacing, editing, writing, cinematography and score are all spot-on. The i's are all dotted; the t's are all crossed. By that reckoning, I can't think of a single aspect of The Day of the Jackal that doesn't meet the criteria.

This is all-the-more impressive when one considers the film intentionally minimizes two aspects that often contribute to a movie's greatness: complex characters and a discernible music score. I never read the original Frederick Forsyth novel, but the only truly intriguing character in the film is the Jackal himself (Edward Fox). Even then, all we really know about him are his cold-blooded, calculating methods. And while music is present in the film, it's used very sparingly, enhancing the docudrama directorial style utilized by Fred Zinnemann.

Not only that, the film speculates a 1963 assassination attempt on France's real-life president, Charles de Gaulle. Since that never actually occurred, we already know the Jackal - hired by the French military underground - is destined to fail, making the ending a foregone conclusion. But as they say, the journey is more important than the destination, and the journey this film takes is intricate, consistently fascinating and surprisingly suspenseful. A remarkable feat, when you think about it.

The characters exist simply to serve the plot, which presents the Jackal's patient, meticulous methods as he carries out his plan, and the British & French governments' equally complex efforts to stop him. Unlike the flamboyant 1998 remake, The Jackal, at no time does this film rely on stupid characters to drive the story forward. In that respect, The Day of the Jackal manages the impossible...manipulating the audience to be invested in both sides of the conflict, despite knowing almost nothing about anyone involved.

Speaking of the remake, I must confess I consider The Jackal a good (and under-appreciated) film in its own right. But aside from the basic concept and a few key scenes, it bares little narrative or stylistic resemblance to the original.

One might question how The Day of the Jackal could go this long before getting its first American Blu-ray release, but at-least its finally here with a great transfer from Arrow Video. For such an influential film that's rightfully regarded as an all-time classic, the bonus features (outlined below) are relatively sparse. Still, the movie itself is worth revisiting again and again, making this one of the best discs of the year.

MEE-OW! LIKE TAUNTING A MOUSE TO DEATH
Posted by D.M. Anderson at 2:13 PM