SOLO: A STAR WARS STORY and the Forgone Conclusion 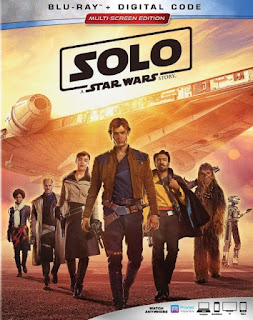 Like a lot of folks, I was initially dubious about Disney's acquisition of Lucasfilm. Sure, I was ecstatic that the Star Wars saga would indeed continue - especially without George Lucas (who lost the plot a long time ago). But announcing spinoffs that would result some kind of Star Wars-related movie every year? The prospect of overkill loomed large. Did we really need character origins or side stories based on a single line of dialogue from the original trilogy?

Then Rogue One was released. We didn't really ask for an entire film about how the rebels stole the Death Star plans, but damn, if it wasn't the first one that actually felt like a war movie. While obviously still part of the Star Wars universe, Rogue One was a gritty, in-your-face film that owed as much to The Dirty Dozen and Where Eagles Dare as the saga which inspired it.

If Rogue One is the classic war film in the Star Wars universe, then Solo could be considered its classic western. And that's a great thing. We may not have needed a Han Solo origin story, but in the tradition of the coolest westerns, the film gives a true anti-hero as its main protagonist, a first for the franchise. While no one could ever truly replace Harrison Ford, Alden Ehrenreich is terrific in the role. He sort-of resembles Ford if you squint your eyes, but more importantly, he incorporates just enough of the character's mannerisms that we believe this is what Han might have been like in his reckless youth. Frankly, I don't understand much of the criticism that's been leveled at him in some circles. Wouldn't a Ford lookalike who can't act be worse?

In fact, I'm surprised at some of the negativity aimed at the film in general. As much as I revere the Star Wars saga, its massive story-arc has become so massive, sweeping and concerned with its own mythology that we tend to forget the 1977 film was just a simple, old-fashioned space opera with no concrete franchise plans. More than any other sequel or prequel, Solo maintains the same light, playful tone as the original.

And yeah, a cynic can question the film's overall necessity. We already know about Han's legendary Kessel Run, and how he acquired the Millennium Falcon from Lando Calrissian (Donald Glover) is common knowledge, but it sure is fun watching it all play out. The story touches all the bases, from befriending Chewbacca to the story behind Han's dice. But Solo isn't bereft of creativity. In addition to some great new characters, a few nifty story surprises are thrown in. There's also a brief nod to the maligned prequel trilogy, as well as an amusing moment near the end that could be interpreted as a sly dig at Lucas for altering the one scene that established Solo as a questionable rogue in the first place.

Like Rogue One, Solo takes a story we've known about for years and turns it into a rousing adventure, albeit much lighter in tone. It's essentially a space western - with touches of classic pirate films - but still fits nicely in the Star Wars universe. Who cares if the outcome is a foregone conclusion?

EXTRA KIBBLES
"SOLO: THE DIRECTOR & CAST ROUNDTABLE" - Ron Howard and the main cast sit around a gaming table for a laid-back chat about making the movie. Pretty charming.
FEATURETTES:
"Becoming a Droid: L3-37" - A feature about Lando's android co-pilot.
"Into the Maelstrom: The Kessel Run" - How the classic mission was put together.
"Remaking the Millennium Falcon" - 'Nuff said.
"Kasdan on Kasdan" - The father-son screenwriting team.
"Team Chewie" - A focus on the "new" Chewie and this famous friendship. "Soundrels, Droids, Creatures and Cards: Welcome to Fort Ypso" - The set design of Lando's dive.
"The Train Heist" - What's a western without a train robbery?
"Escape from Corellia" - I really dug the 70s' car chase approach to this sequence.
DELETED SCENES
DIGITAL COPY
KITTY CONSENSUS:

MEE-OW! LIKE BEING TURNED LOOSE IN A BIRD SANCTUARY.
Posted by D.M. Anderson at 11:04 PM