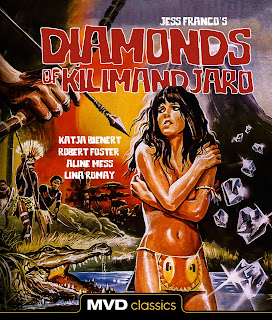 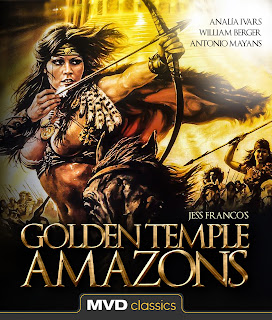 AVAILABLE ON BLU-RAY FROM
MVD CLASSICS

While I'd heard of the late Jess Franco, I never saw any of his films until now. After enduring both Golden Temple Amazons and Diamonds of Kilimandjaro - available on Blu-ray from MVD Classics - I suppose I should give him a grudging a tip-of-the-hat. After all, here's a man who wrote & directed nearly 200 movies over 50 years without ever learning how.

Perhaps it isn't fair to assess an entire career based on two films (even Hitchcock helmed a few pooches), but Franco made these exercises in ineptitude with 30 years' experience under his belt, so it's safe to assume they're representative of his body of work. Relatively speaking, even fellow schlockmeister Herschel Gordon Lewis managed to display some technical proficiency and professionalism over time.

Franco must have fans out there, though, whom I'm assuming find his brand of audacious awfulness endearing.

What brand, you ask? Based on the evidence, I came to the following conclusions:
You get the idea.

Golden Temple Amazons, one of 10 films he directed in 1986 alone, is the more technically proficient of the two. But again, that's a relative term. It's laughably acted and atrociously edited, with audio apparently recorded using a single distant microphone. The opening scene is uproariously gratuitous, featuring a tribe of topless Amazon women - though they look more like college co-eds - riding horses through the jungle. Franco's camera leers lovingly over each one as they jiggle and bounce to a tinny synthesizer soundtrack. This scene goes on for about five minutes!

As for the plot, Liana (Analia Ivars) and her boobs square off these evil Amazons, ruled by the evil Uruck (William Berger), looking more like a middle-aged white lawyer who must have owed Franco a favor. There's lots of nudity, stock footage, a smart monkey, some hilarious girl-on-girl combat and a supporting performance from a guy mostly remembered for the exploding eye scene in Slugs. And let's not forget Eva Leon as Uruck's most ruthless warrior, Rena, attacking her role like she's auditioning for Ilsa: She-Wolf of the SS. Oddly enough, though, the movie is mostly devoid of the violence and sex for which Franco's renowned.

But that movie is King Solomon's Mines compared to Diamonds of Kilimandjaro, one of 13 movies Franco belched-out in 1983. In the very first scene, a plane crashes in the jungle; it disappears over the horizon, we see a small explosion, then hear the crash, and then we still hear the sounds of the engines. Later, when a nude swimmer is being pursued by an alligator, which is then shot by two of our heroes, the audio goes silent for several minutes (save for the music). This is unintentional because characters are speaking and firing weapons the whole time. At first I thought this might have been a glitch in the disc, but then the entire three-minute scene runs again, this time with the audio restored. Franco & friends simply never bothered to go back and remove their mistake. I guess when you're making over a dozen movies in a year, there just isn't time.

But while there's plenty of unintentional humor, Diamonds of Kilimandjaro is kind-of monotonous and almost perversely voyeuristic. Star Katja Bienert (who's nearly naked throughout the entire film) was only 16 years old when she made this...and looks more like she's 14. The scene where she briefly makes-out with grimy, middle-aged Antonio Mayans is just plain creepy. Maybe some Jess Franco fans out there are willing to defend such a questionable casting choice, though I'm not sure I'd want to hear their argument.

Since both films are new to Blu-ray, I suppose those same fans will probably be delighted by these. The transfers are decent, a few amusing trailers are included and the cover art for both is suitably lurid. For everyone else, unless you plan on rehearsing for a guest appearance on Mystery Science Theater 3000, steer way clear.