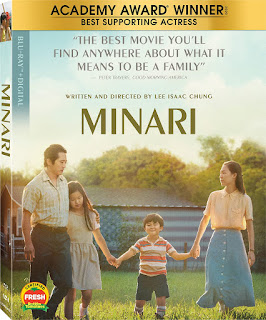 Minari is quietly engaging, but not the Oscar-baiting film I expected. I suppose the basic premise had me anticipating something related to the obstacles and racism faced by a Korean family after moving to Arkansas to start a vegetable farm. While there’s obstacles aplenty, most are either their own doing or can be attributed to bad luck. The Yi family’s culture plays a significant role in the narrative, but none of the external conflict stems from their ethnicity.

Thematically, Minari could be about any family uprooting themselves to chase the American Dream. But writer-director Lee Isaac Chung based the film on personal experiences growing up, which might explain why the unusual relationship between young David (Alan Kim) and his cantankerous grandmother, Soon-ja (Oscar winner Youn Yuh-jung), is the most endearing part of the film.

The crux of the story, however, is Jacob’s (Steven Yeun) struggle to make the farm successful. Headstrong and somewhat self-absorbed, his dream is not shared by wife Monica (Han Ye-ri), which exacerbates their already-volatile marriage. It often appears as though Jacob values his land more than his family. The Yi’s are also torn between adhering to traditional Korean customs and appropriating American culture, which is an initial - and amusing - source of conflict between David and Soon-ja.

Though occasionally downbeat and poignant, Minari is just-as-often touching and laugh-out-loud funny. The characters feel authentic and their fluctuating relationships drive the narrative, bolstered, of course, by outstanding performances. Yuen, in particular, does a tremendous job conveying Jacob’s complexities. We may not always approve of his seeming indifference to the family’s emotional well-being, but part of us empathizes with his efforts to do something with his life beyond “chicken sexing” (I had no idea that was a thing).

Of course, Minari was nominated for plenty of Oscars, most of which it arguably deserved. I do, however, think it was snubbed in a few technical categories, specifically its unassuming production design. The film takes place in the early 1980s and I gotta say the Yi’s rickety old mobile home is a spot-on recreation...the cheesy wood paneling, the archaic light fixtures, the crappy old TV with bad reception, the thrift store furniture and - most amusingly - the giant “mountain water” bottle. Hell, I remember partying in houses just like that, right down to the cinder blocks supporting the entire building. That attention to period detail really immerses us in the decade.

Despite an harrowing final act, Minari concludes with a quietly optimistic denouement, more hopeful than heartbreaking. Very deliberately paced, it ain’t the kind of film one would frequently revisit, but most could probably relate to its story and themes...Korean or not.