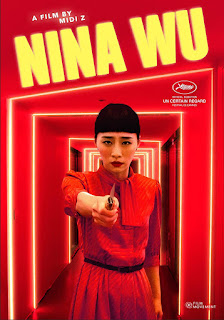 Surreal, somber and ultimately pretty harrowing, Nina Wu isn’t for everybody. What might be the most distressing aspect of the film is that the title character’s story is not unique.

Nina (Ke-Xi Wu, who also co-wrote the screenplay) is a struggling actor who finally lands an audition for a big-budget spy thriller. However, the role also involves explicit sex scenes and full-frontal nudity. Nina’s agent, indifferent to her concerns, more-or-less suggests any real actor doesn’t have a problem with nudity (of course, he means any female actor).

Though Nina gets the part, she’s subjected to all sorts of humiliation and abuse from the film’s tyrannical director, culminating in a scene where an action scene goes awry and she nearly drowns. Once the film is completed and released, Nina is showered with critical praise as a rising star, though significantly, the media appears more obsessed with her sex scenes than her performance. When Nina returns to her rural hometown to visit her ailing father, she reunites with fellow-actor and former lover Kiki (Vivian Sung), whom she’s frequently messaging. One gets the impression Kiki is the only real friend Nina has.

Despite her sudden celebrity, Nina seems perpetually unhappy and a majority of the episodic, non-linear narrative chronicles what leads to her emotional & psychological breakdown (most of it related to her treatment in the movie business). However, we are often uncertain if we’re watching a flashback, the present or Nina’s imagination until well-into a scene. Disorienting the viewer is obviously director Midi Z’s intention and it’s sometimes quite effective in conveying Nina’s despair. It can also be a little frustrating - especially during the meandering hometown sequences - at-least until the shocking final scene, which finally makes-plain why Nina is so disillusioned.

Nina Wu is not necessarily a good time at the movies, but it’s a quietly powerful film with themes that are all-too relevant in the #MeToo era. While the pace, direction, music and beautiful cinematography contribute to the appropriately pessimistic tone, it’s ultimately Ke-Xi Wu’s writing (apparently drawn from experience) and understated performance that drives the message home.