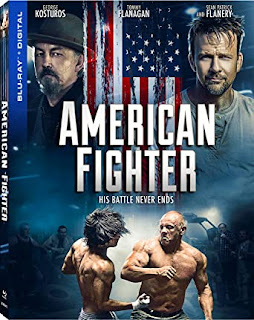 Though there’s no indication anywhere on the cover or in the synopsis, American Fighter is actually a sequel. The first film, American Wrestler: The Wizard, was released back in 2016. Those who watched and enjoyed that one will be happy to know Iranian high school wrestler Ali Jahani (George Kasturos) is back, this-time in college.

Those who haven’t - like yours truly - don’t fret.  American Fighter plays like a stand-alone film, with no references to anything that might have happened in the first one. In fact, if you’ve seen your fair share of inspirational sports movies, you’re actually ahead of the curve. There’s nary a scene you won’t see coming a mile away.

Not that the film isn’t entertaining. If expectations are kept in check - as one should with any movie boasting Sean Patrick Flanery in the cast - it’s a mildly engaging spin on a tried-and-true formula (which is, of course, ‘based on a true story’). This time around, Ali enters the world of underground fighting in hopes of raising enough money to bring his ailing mother to America.

You know what comes next...Ali shows promise, then gets a beat-down, is then mentored by an older, wiser fighter (Flanery), then gets a rematch, etc. In the interim, there’s some good old fashioned boy gets girl, boy loses girl, boy gets girl back. The romantic subplot serves no real purpose, but it’s here if you want it. And since the story takes place in the ‘80s, synths and drum machines dominate the score, with a couple o’ power ballads tossed in.

Though it positively reeks of deja vu, American Fighter does boast some exciting, brutal fight scenes and the performances are decent. Kasturos keeps Ali likable, while the always-reliable Tommy Flanagan is good as a shady fight promoter. Nothing in the film leaves a lasting impression, but there are far worse ones out there milking the same formula.