THE FINAL COUNTDOWN: The Music Makes the Movie 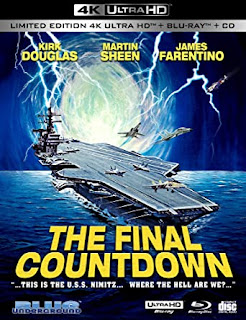 The Final Countdown was one of many films that I caught at the Southgate Quad (RIP), which was close enough to my house that I could bike there with a couple o’ bucks to do some theater hopping. Sometimes I went with friends, but often alone, mainly because a lot of the movies I wanted to see weren't on their radar.

Some of my favorite childhood memories are of flying solo to enjoy the likes of Capricorn One, ffolkes, Raise the Titanic, The Cassandra Crossing and The Medusa Touch...enjoyably undemanding, moderately-budgeted fare which played in one of the Southgate’s smaller auditoriums for a few weeks before getting a second life on HBO. More often than not, the theater was nearly empty, so it was like these films were being made exclusively for me.

Similarly, the reasons I still hold The Final Countdown in such high regard are more nostalgic than artistic. With a concept that the old Twilight Zone probably could have pulled off in 30 minutes, the film supposes what would happen if a modern aircraft carrier were thrown back in time by a freak storm to December 6, 1941...the day before Japan’s attack on Pearl Harbor. Whether or not the crew should mess with history by intervening leads to a few interesting paradoxical debates, but for the most part, there’s nothing particularly memorable about the performances, direction or special effects (which were kinda wonky even in 1980). And though the final scene offers a nifty narrative twist, it's probably best not to put its logistics under a microscope.

However, there are a few aspects of The Final Countdown that make the film look and feel much grander than it really is. Some of the aerial cinematography is astounding, particularly a scene in which two F-14s engage a couple of Japanese fighter planes. Additionally, the Navy’s enthusiastic participation means the viewer is privy to the operations of the U.S.S. Nimitz in almost pornographic detail. A lot of it is actually quite fascinating, especially for military buffs.

But the movie’s undisputed MVP is composer John Scott, whose overachieving score renders the action more rousing, the tender scenes more poignant and the implications of time travel more ominous. Similar to what John Barry’s sweeping music did for the otherwise-rote Raise the Titanic, Scott provides a majority of the film’s most emotionally stirring moments. One of the best, most underappreciated scores of that era, I’ve never forgotten some of its themes.

And it’s these aspects which make this limited edition release a real keeper. Blue Underground has put it out on Blu-ray before with a pretty decent transfer, but while I’m still not 100% sold on the overall virtues of 4K Ultra, I gotta say the format serves this film well. The Final Countdown has never looked or sounded better (trust me, I’ve owned it in every format). But the best bonus feature is a CD of John Scott’s amazing score. Consisting of 23 tracks, it’s a great listen, even as a stand-alone piece of music.

Aside from a supplemental booklet, the remaining extras are carried over from the original 2008 Blu-ray. As for the movie itself, The Final Countdown remains a wonderfully nostalgic piece of cinematic comfort food. While definitely a product of its time - I wouldn’t have it any other way - seeing it in 4K made me feel like I was 15 again, back at the old Southgate and catching it for the first time.

“LLOYD KAUFMAN GOES HOLLYWOOD” - Before finding bigger fame cranking out Troma films, Kaufman helped get this picture off the ground (and also plays a small role). One thing is clear...the man had no love for director Don Taylor.