MAN WITH A CAMERA: Bronson Does a Different Kind of Shooting 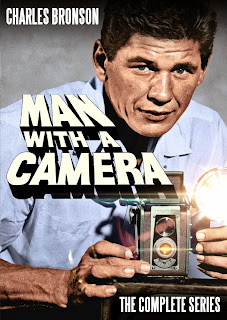 Review by Carl, the Couch Potato😽

If you’ve ever spent an appreciable amount of time on this site, you may have noticed we generally don’t cover a lot of television shows. But when we do, it's usually for one of three reasons: 1) The show has certain cinematic qualities; 2) It draws inspiration from a particular film, or vice versa; 3) It features a Hollywood legend.

And hey, they don’t get much more legendary than Charles Bronson, who’s always made us purr. Though he previously appeared in a lot of supporting roles, Man with a Camera marked the first time he was the unequivocal star. Originally airing on ABC, the show came-and-went on ABC with little fanfare. If not for Bronson’s subsequent international stardom, it would earn little-more than a footnote in the annals of TV history.

To be honest, I was largely unaware the show even existed until recently, and maybe some of you Bronson fans are, too. As such, this two-disc set of the complete series is a fascinating curio.

The title pretty-much says it all. Bronson plays Mike Kovac, a hotshot freelance photographer who doesn’t let anything get in the way of a high-paying gig. He finds himself in a variety of adventures...turning the tables on gangsters, solving various mysteries, resolving conflicts, working with local police and protecting the innocent. Kovac relies on intuition, skill, a variety of high-tech gadgets (for the time) and of course, the occasional fist.

Speaking of fists, we’re so accustomed to Bronson as a stoic, stone-faced tough guy that it’s kinda surreal seeing him expressive and chatty. And the only shooting he does is with a camera. Still, he’s engaging enough to carry the show through most of its 29 episodes, which vary in consistency. Some episodes are suspenseful and intriguing, while others get dragged down by heavy-handed sermonizing. By the latter half of season two, they’ve pretty-much run out of interesting things for Kovac to do.

But while Man with a Camera isn’t what anyone would ever mistake for classic television, it did give Charles Bronson his first stab at being a leading man. That-alone gives it a certain level of historical importance.