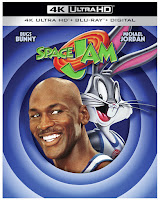 SPACE JAM Arrives on 4K Ultra HD 6/6
To celebrate the 25th anniversary of the beloved classic, Warner Bros. Home Entertainment announced today that the perennial family film Space Jam will be released on Ultra HD Blu-ray Combo Pack and Digital on July 6th. Six-time NBA champion Michael Jordan and Looney Tunes linchpin Bugs Bunny star in the family comedy classic that introduced a whole new dimension of entertainment. The film also stars Wayne Knight, Theresa Randle, and the voice of Danny DeVito. Bill Murray, Larry Bird, Charles Barkley, and Patrick Ewing appear as themselves. Space Jam was produced by Ivan Reitman and directed by Joe Pytka. It received an Annie Award for Best Individual Achievement: Technical Achievement and a Grammy® Award for Best Song Written Specifically for a Motion Picture or for Television (1997). Space Jam will be available on Ultra HD Blu-ray Combo Pack and includes an Ultra HD Blu-ray disc with the feature film in 4K with HDR and a Blu-ray disc with the feature film and special features. Fans can also own Space Jam in 4K Ultra HD via purchase from select digital retailers beginning on July 6th. 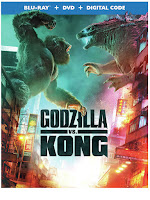 GODZILLA VS. KONG on 4K, Blu-ray & DVD 6/15
Witness a spectacular battle for the ages when “Godzilla vs. Kong” arrives for Premium Digital Ownership at home on May 21. From Legendary Pictures and Warner Bros. Pictures, the film is directed by Adam Wingard (“The Guest,” “You’re Next”) and stars Alexander Skarsgård (“The Legend of Tarzan,” TV’s “Big Little Lies”) and Millie Bobby Brown (TV’s “Stranger Things”). The film will also be available on 4K, Blu-ray Combo Pack, and DVD beginning on June 15. The 4K Ultra HD Blu-ray disc of “Godzilla vs. Kong” will also feature a Dolby Atmos® soundtrack remixed specifically for the home theater environment to place and move audio anywhere in the room, including overhead. To experience Dolby Atmos at home, a Dolby Atmos enabled AV receiver and additional speakers are required, or a Dolby Atmos enabled sound bar. Dolby Atmos soundtracks are also fully backward compatible with traditional audio configurations and legacy home entertainment equipment. “Godzilla vs. Kong” will also be available on Movies Anywhere. Using the free Movies Anywhere app and website, consumers can access all their eligible movies by connecting their Movies Anywhere account with their participating digital retailer accounts.

H.P. Lovecraft's THE DEEP ONES on DVD & Digital 6/15
A married couple rents a beachside cottage only to be surrounded by peculiar neighbors and strange occurrences. They soon discover themselves in the grips of a mysterious cult and their ancient sea god. Winner of Best Film, Best Director, Best Actor, and Best FX – Anatomy Crime & Horror International Film Festival, and winner of Best Film – Arizona Underground Film Festival, H.P. Lovecraft’s The Deep Ones is written and directed by Chad Ferrin (Parasites, Someone’s Knocking at the Door) and stars Gina La Piana (Stay With Me, Ali G Indahouse, Our Bnb Life), Johann Urb (“Arrow,” Resident Evil: Retribution, “Californication”), Robert Miano (Fast & Furious, Donnie Brasco, Get Done), and Jackie Debatin (“The Office,” “Kroll Show,” “According to Jim”). H.P. Lovecraft’s The Deep Ones is distributed by 123 Go Films and Distribution Solutions, a division of Alliance Entertainment. 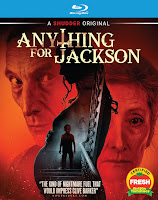 ANYTHING FOR JACKSON - Available on VOD, Digital, DVD & Blu-ray 6/15
In ANYTHING FOR JACKSON, after a tragic car accident that took their grandson’s life, Audrey and Henry are unable to go on without him. Following the guidance of their ancient spell book, the elderly couple decide to abduct a young pregnant woman with the intention of performing a "reverse exorcism” to channel their grandson’s spirit inside her unborn child. But when it becomes clear the ritual has called upon more than one spirit, the couple realize they have summoned more than they bargained for and must put an end to the evil entity they’ve invoked. Directed by Justin G. Dyck (Christmas With a Prince) and written by Keith Cooper (A Witches’ Ball), ANYTHING FOR JACKSON stars Sheila McCarthy (The Broken Hearts Gallery, Die Hard 2), Julian Richings (Spare Parts, Man of Steel), Konstantina Mantelos (“Miss Misery”, “Paranormal 911”) and Yannick Bisson (“Murdoch Mysteries”).
Posted by D.M. Anderson at 7:43 PM