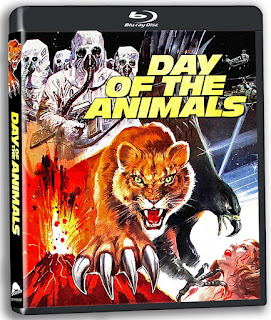 Revisiting Day of the Animals decades later, I can’t help but wonder what kind of director William Girdler might have become if he weren’t tragically killed less than a year after its release. He probably wasn’t destined to be the next Hitchcock, but getting better with every picture. Though laughably derivative, his biggest film, Grizzly, was well-made and entertaining...a far cry from his Three on a Meathook days.

Day of the Animals, Grizzly's sorta-spiritual sequel, may not be as much goofy & gory fun, but it’s more skillfully directed and doesn’t play like it was written by a photocopier. If not the next Hitchcock, I think being the next Wes Craven was certainly within Girdler’s grasp.

But even if you don’t agree, where else can you see a maniacal, shirtless Leslie Nielsen take-on a grizzly bear with his bare hands?

Similar to other nature-run-amok horror films of the era, Day of the Animals boasts an environmental message, with just a dash of old school nihilism thrown in for good measure. A hole in the ozone layer appears to be frying the brains of critters living above 5,000 feet (you know...closer to the sun and all), rendering them homicidal.

But the pièce de résistance is Leslie Nielsen as mean-spirited ad exec Paul Jenson, who’s continually locking horns with Buckney. Jensen is enjoyably unlikable from the get-go, but trust me, watching Nielsen take his character from zero-to-batshit in a single scene - the aforementioned bear battle - is something to behold. This was 1977, a few years before Airplane! made him synonymous with parody. But even with all his scenery chewing, Nielsen seems well-aware of the scene’s utter ridiculousness, which makes it the campy high-point of the entire film.

Elsewhere, Day of the Animals is slickly made, and with the exception of a goofy sequence featuring high-flying rats, the animal action is well-executed. Mountain lions, bears, wolves, snakes and buzzards all take their shots at picking-off the cast. However, unlike the fiery climax of Grizzly, the final act is kind-of a let-down, with a tacked-on resolution that suggests no one knew quite how to end it.

But like Grizzly, the story behind Day of the Animals is just as interesting as the film itself, especially the backstory & unknown fate of producer Edward L. Montoro, the subject of lengthy discussion in some of this disc's many new bonus features (along with a great archival making-of doc). Nicely remastered, this disc makes a nifty companion piece to Severin Films’ simultaneous release of Grizzly.

As for the late William Girdler...he’d go on to make just one more film - a bonkers debacle called The Manitou - before dying in a helicopter crash. Though not quite the endearing cult classic that Grizzly became, from a technical standpoint, Day of the Animals ended up being his most accomplished film.

“NIGHTMARE USA” AUTHOR STEPHEN THROWER - Whereas he discussed Girdler’s short career on the Grizzly release, this time Thrower focuses his attention on producer Edward L. Montoro, a pretty shady character who had a habit of screwing people over.

“AGAINST NATURE” - Interview with actor Andrew Stevens, who certainly has no love for Montoro!

“SOMETHING WAS OUT THERE: DAY OF THE ANIMALS 30 YEARS LATER” - Vintage making-of featurette. Pretty interesting.

ALTERNATE OPENING TITLE SEQUENCE - With the alternate title, Something is Out There.