SHOPLIFTERS OF THE WORLD Preaches to the Converted 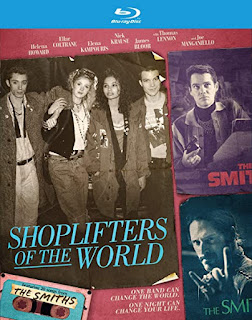 If nothing else, Shoplifters of the World scratched a lingering itch. For years, I’ve been hearing a particular song infrequently pop up on the radio (mostly oldies stations). Driving, semi-industrial and somewhat ominous sounding, I've always loved the song but never paid attention to the title or artist.

It turns out that dark little ditty is “How Soon is Now,” arguably the most famous song by The Smiths, whose music is not-only prominent throughout this film, it’s central to the narrative. Writer-director Stephen Kijak appears to be attempting an American Graffiti for '80s-era navel-gazers while simultaneously equating The Smiths' cultural relevance to that of The Beatles (for alt-rockers, maybe it is). However, he also demonstrates a considerable amount of self-congratulatory smugness.

Part love letter to The Smiths & those who loved them, part f**k-you to anyone who didn’t, Shoplifters of the World is almost condescending in tone, which is ironic considering the plot isn’t too far removed from the dumbbell comedy, Airheads. Only instead of likably ham-headed headbangers, we have a bunch of self-absorbed young adults reeling from the break-up of their favorite band. One goes as far as to break into a heavy metal radio station and force the DJ at gunpoint to play nothing but Smiths music for the rest of the night.

In the meantime, the gunman’s friends spend the evening mourning their loss, complaining about first-world problems, questioning their futures and expressing an overall contempt for everyone outside of their circle. Which would be fine, since everyone that age is a walking ball of confusion, but these folks are generally unpleasant to be around, their conversations relentlessly pessimistic. When not bitching about their own lives, they’re practically mansplaining - to anyone forced to listen - why The Smiths are the only band that matters.

The attention to ‘80s period detail is impressive, so Shoplifters of the World might work as a nostalgia piece for some, but probably only kindred spirits who share Kijak’s gushing admiration for The Smiths and an equally lowly opinion of anyone who only know “How Soon is Now.” Frequently interspersed with video and interview footage of the band, the film mostly preaches to the converted. Everyone else might find it kind of pretentious.

MEH. LIKE SHARING THE BED WITH THE DOG.
Posted by D.M. Anderson at 6:11 PM