GRIZZLY (1976): Nostalgia for the Stupidly Stricken 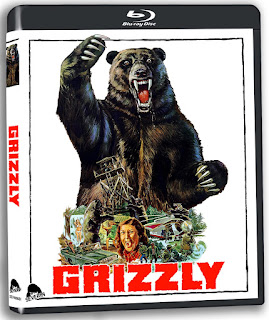 Kids are stupid. I know because I was one.

Like a lot of kids growing up in the ‘70s, I was stricken with Jaws fever. But I was hit harder than most, feeling compelled to see it again and again. There was a brief time in 1976 when I thought I was over it, but relapsed soon after. Ever since, Jaws has topped my list of the greatest films of all time.

The inevitable rip-offs started popping up in theaters about a year later, Grizzly being one of the first. Still afflicted with the fever but thinking a cure was at-hand, I had no choice but to be there opening night. It was even playing in the biggest auditorium at the Southgate Quad where Jaws first changed my life. And no way was I gonna pass-up any movie that touted “18 feet of gut-crunching, man-eating terror!”

I thought Grizzly was awesome, even briefly declaring it better than Jaws, mainly because “Teddy” the bear was brand new and Bruce the shark was becoming a distant memory. In 1976, when they didn’t show-up on DVD or VOD a few months later, movies became distant memories really fast, especially when you’re 12. Kids at that age are generally pretty stupid, many equating the best thing they saw with the last thing they saw. Of the two films, Grizzly was the shinier penny.

Finally, it seemed I was cured!

But as it turned out, there is no cure for Jaws fever. Movies like Grizzly are more like a symptom, which I realized when it aired on ABC a few years later, retitled Killer Grizzly (presumably to avoid confusion with the huggable ones). It was the same old film, only this time I saw it for what it was: A budget-conscious knock-off of a modern classic. Deep down inside, even my stupid 12-year-old self probably always knew that.

Then a funny thing happened over the years. While Jaws continues to be revered as one of the greatest films of all time, Grizzly became something of a cult classic in its own right. Of course, part of that is due to how shamelessly it copies the Jaws blueprint, right down to the narrative structure, characters, perspective shots and most of the attack scenes. But as rip-offs go, it’s extremely well made. The late William Girdler may not have had the talent or resources of a Spielberg, but he knew how to deliver a lot of bang for the buck. Here, he directs a decent B-list cast with workmanlike skill and has no illusions over the film’s intended audience: Stupid 12-year-olds still afflicted with the fever. As such, Grizzly delivers exactly as promised. Can you honestly say the same thing about Jaws’ own sequels?I’m certain there are plenty of other formerly-stupid kids similarly bowled over by Grizzly’s imitative earnestness back then. For them, the nostalgic value of this Severin Films release is irresistible. The film has been released on Blu-ray before, but in addition to a beautiful transfer, this disc comes loaded with a new batch of comprehensive, entertaining bonus material (in addition to a few archival features). It turns out the story behind Grizzly is as interesting as the film itself.

And even though I’m no longer as stupid as I used to be, Grizzly is still a lot of throwback fun.

“NIGHTMARE USA” AUTHOR STEPHEN THROWER - The best of the bonus features, author Thrower discusses William Girdler’s career at-length, with a lot of emphasis on Grizzly. Especially interesting is his career leading up to it.

“MAKING MOVIES WITH GIRDLER” - This is an audio interview with J. Patrik Kelly III, who knew Girdler well. He was also a production manager and assistant director on some of Girdler’s films.

“THE TOWERING FURY” - Interview with actor Tom Arcuragi (the guy in the tower).

AUDIO COMMENTARY - By Nathaniel Thompson (Mondo Digital) and writer Troy Howarth. A good listen, these guys not-only discuss the film itself, but most of the actors involved, Girdler’s filmography, exec. producer Edward l. Montoro and the era of exploitation films when this was released.

VINTAGE FEATURETTES - “Movie Making in the Wilderness”; “Jaws with Claws.”